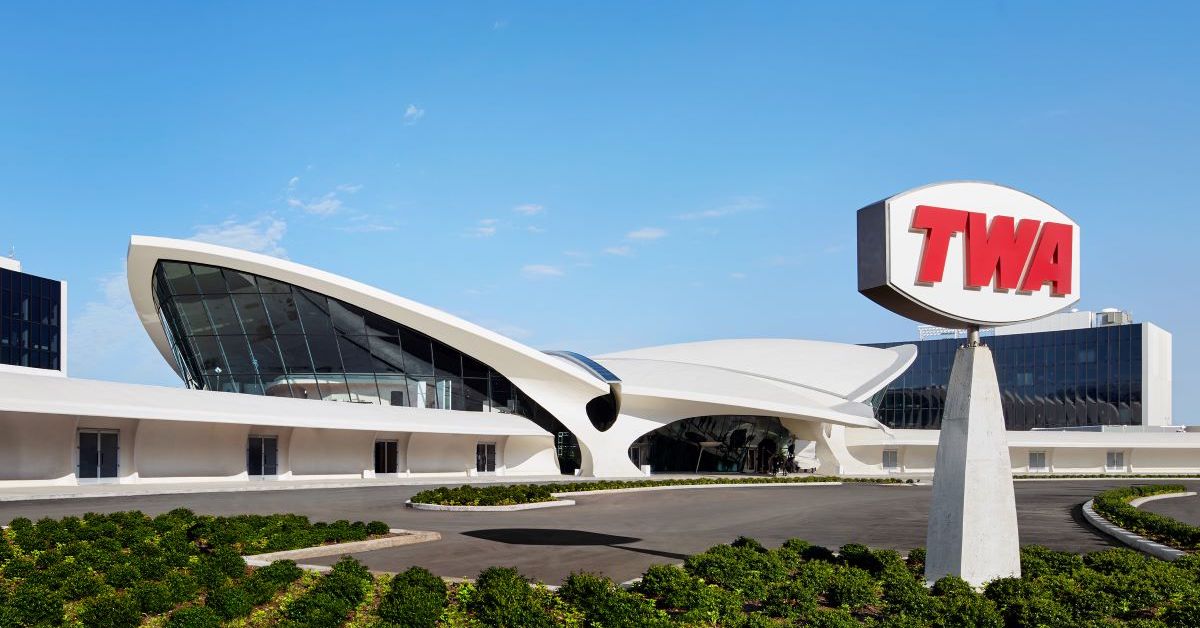 On a recent trip, my husband and I were stuck at JFK airport for an overnight layover of less than 12 hours, so we opted for the convenience of a night at the iconic TWA Hotel in the original TWA terminal. What an amazing experience.

It started after we collected our luggage at terminal 5 and followed the instructions to find the elevator marked ‘TWA Hotel’. The bright colors of the red and white logo drew us in. We entered in 2022 and exited the elevator to 1962.

The long red carpet led us into the hotel and 60s music played over the PA system. This – along with the vintage touches, such as the payphones and typewriters at the check-in counter – really made you feel like you had traveled back in time to the 1960s. This was particularly poignant for me , because 1962 is the year of my birth. I was coming back from Granada, where I celebrated my 60th birthday.

Pro tip: When you exit the elevator, be sure to go right and see a replica of TWA owner Howard Hughes’ office.

Here are some of the unique experiences at TWA Hotel.

TWA Hotel hosted me on a press trip, but all opinions are my own.

1. One of the best hotel bars in the world

Enjoy a classic martini at the Connie Cocktail Lounge. This 1958 Lockheed Constellation “Connie” aircraft has been lovingly restored to its original condition and converted into a lounge serving cocktails and light snacks. After retiring from TWA, this “Connie” served as an Alaskan bush plane and marijuana dropper. The painstaking restoration included the search for authentic parts to bring it back to its former glory.

There are no reservations and it is first come, first served. departures magazine has selected the Connie Cocktail Lounge as one of the best hotel bars in the world. Be sure to try “Vodka is My Co-Pilot”, a classic dry vodka martini. The lounge is located on the tarmac and is sometimes closed for private events. If closed, you can see the plane through the many huge windows in the hall.

For a true retro experience, take to the tarmac around the 1958 Lockheed Constellation “Connie” airplane to the Roll A Rama ice rink. It is the only skating rink in the world in an airport. After a long flight, roller skate to vintage tunes with a little disco. Did you know that roller skating burns 350 calories per hour? Tickets are on a first come, first skate basis and all skates are sanitized after each use. If you forgot socks, they are available for purchase at the gift shop.

The sunsets are beautiful over JFK, especially seen from the TWA hotel. My room had an incredible view of the sunset. There’s just something about an airport sunset that feels cinematic as day turns to night and the runway lights up. Another option is to head to the rooftop pool deck where you can enjoy the view with a cocktail from the pool bar.

4. Museum exhibits at the TWA Hotel

Learn about the era of the jet in the museum’s exhibits spread throughout the TWA hotel. MCR/MORSE Development collected over 2,000 TWA artifacts in the years before the hotel opened with a plan for future exhibits. The New York Historical Society organized the exhibits. Current exhibits at the hotel include objects belonging to Howard Hughes and architect Eero Saarinen’s plans for the TWA terminal. You can also see 37 complete TWA uniforms from 1945 to 2001, many by famous designers. It was so interesting to see what the uniforms looked like over the decades.

Exhibits are nestled all around the hotel, so be sure to take the time to explore so you don’t miss a thing. I loved the examples of in-flight equipment such as playing cards and silver tableware. Vintage TWA travel posters by David Klein line a wall highlighting the Jet Set era. One wall has a long timeline highlighting what was happening in 1962 when the terminal opened. Since I was born in 1962 I found it fascinating and read every word. All exhibits are free and open to the public.

5. The largest hotel gym in the world

I was really disappointed that I didn’t have more time at the hotel when I saw this gym. It is 10,000 square feet, making it the largest hotel gym in the world. Access to TWA Fitness is included for registered hotel guests and is open 24/7. I am a huge Peloton fan and the cycling center has 14 Peloton bikes, which at in my opinion, is the best of all hotels. There are also 12 treadmills, 10 ellipticals, a full yoga studio, and a variety of strength-training options, including the TRX Suspension Trainer. There are a variety of group classes and personal training available. There truly is a workout for everyone.

The rooms at the TWA Hotel are magnificent. Each bedroom has floor-to-ceiling windows that are surprisingly quiet thanks to super-sturdy glass that is the second thickest in the world. I did not hear a single plane during my stay. Rooms are 1960s-inspired with rotary phones and mid-century modern furniture designed by Eero Saarinen, the terminal’s original architect. The vintage keys are nice, but it also offers plenty of charging options for your smartphone and other electronics.

I stayed in an executive king suite with a historic TWA view. The view of the original TWA terminal allowed you to really see the architectural features of this historic building. The king bed was super comfortable with a Sealy mattress and premium bedding. The rate included unlimited local and international calls on a modernized Vintage Western Electric 500 rotary phone and the WiFi was super fast. As a plus size girl, I appreciated the large fluffy towels in the immaculate bathroom.

The rooftop area is pretty cool. You can watch the jets take off from JFK and at night the airport lights are magical. The infinity pool is a swimming pool in the summer and in the winter it is heated to 95 degrees Fahrenheit and turns into a pool-cuzzi. The pool bar offers a variety of aviation and water-themed cocktails. Food offerings include appetizers, sandwiches, and flatbreads. After being locked on a plane, this is a great place to get some fresh air.

The TWA Hotel has a few unique features that you won’t find in any other hotel. The Twister Room has the game board spread across the floor and walls for a truly unusual take on the 1960s game. The Picture Room has a booth to capture your picture and then display it around the room. There are snapshots of fans living all over the world. In the lobby you will find a Solari split-flap massage board, a classic with the original mechanical operation made in Udine, Italy, displaying sample arrivals and departures.

The Paris Café sits in the footprint of the original Paris Café and Lisbon Lounge in the TWA terminal. It was originally designed by Raymond Loewy, a Parisian industrial designer who created the iconic Coca-Cola contour bottle and TWA twin globes logo of 1959. Now-celebrated chef Jean-Georges Vongerichten serves his specialties at the new Paris Cafe.

“As an avid traveler, I am thrilled to be part of recreating a culinary destination in this iconic landmark,” he said.

The menu is culinary inspired by historic in-flight menus. Make sure you have reservations. We didn’t as we didn’t know how long it would take to clear customs. We were able to sit at the long white counter and enjoyed appetizers and cocktails. It was expensive but the food was very good and how often do you get to stay at such an iconic place? Stop by the Sunken Lounge in the lobby for a pre- or post-dinner cocktail. It has a fun, vintage vibe.

I’m glad we stayed at the TWA hotel. It turned an otherwise strenuous stopover into a fun experience that I will long remember. There is such energy in the hotel that it is contagious. I went from being tired after a long flight to wanting to see everything the hotel had to offer. Be sure to visit the gift shop which has a great selection of TWA themed items in the iconic red and white colors perfect for last minute gifts.

Pro tip: If you have a long layover in JFK, you don’t have to stay at the TWA hotel to get most of the experiences mentioned in this article. You can even buy a pool pass. Just book to not be disappointed.

For more information on airports and flights around the world: