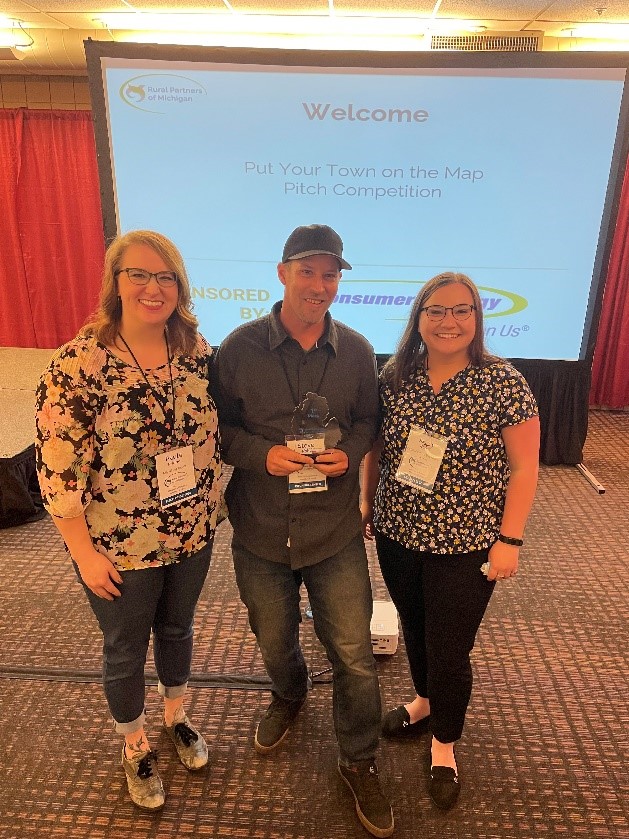 BIG RAPIDS – In an effort to bring more diversity to community activity, the Big Rapids Skatepark Project, which is striving to get a skatepark in town, recently won a grant from the Put Your Town on the Map contest from Consumer Energy.

The competition prizes were awarded on Wednesday, May 18 at the Small Town and Rural Development Conference.

After submitting ideas for projects that will help strengthen and grow their communities, the City of Big Rapids received $25,000 for first place, Gaylord received $15,000 as runner-up, and Hart received $10,000.

The Big Rapids Skatepark project aims to provide the city with a colorful, welcoming and modernized skatepark in northern Michigan. Along with the development of the skatepark, city staff are exploring the expansion of public art with skateable art, a graffiti wall, and unique sculptures.

For submission, members of the project group worked together to submit a skatepark video filmed and edited by Steve Pohl, a local BMX rider and owner of Blue Eye Visuals.

“We are very grateful to receive this funding from the Consumers Energy Foundation pitch competition as it allows us to move forward with the developments of the first phase of the skatepark,” she said. “As the newly designated Pure Michigan Trail Town, the addition of a state-of-the-art skate park along the city’s Riverwalk trail is ideal for local skaters, BMX enthusiasts and other outdoor enthusiasts who come to visit. ”

Project coordinators recently began working with The American Ramp Company to gather feedback from residents on plans for the project.

The proposed location of the park is Sweet Hill Park at 235 Baldwin Street in Big Rapids.

The American Ramp Company will be hosting the virtual feedback survey until May 27 to hear from local riders on their design preferences for the new skatepark. The survey is at https://americanrampcompany.com/survey/bigrapids-mi/.

Black said that project was a long time coming.

“This is a project that the community has really been asking for for over a decade,” Black said. “There have been three different groups over the last decade that have come together to try to organize this project to come to life, but like with most projects, funding has been the biggest hurdle.”

Black worked with the background logistics of writing grants and worked in conjunction with city zoning technician Emily Szymanski to revamp the skate park group online.

Black said that during the five-minute presentation made to Consumers Energy for the grant money, they focused on the community aspect.

“We really echoed the opportunity for kids and people of all ages to engage and learn from each other in the space of a skatepark,” Black said. “It would be an amazing addition to the community with all the other park projects and family activities going on in the community. It really adds to that story and makes Big Rapids an even better place to work, play and live.

The video features a number of community members with different types of riding gear to highlight the park’s diverse use potential.

Pohl directed and composed the video for submission.

“I focused on making a simple, super authentic video for the pitch,” Pohl said. “We really wanted something that was easy to watch and easy to tell, with real people and commentary from real community members. I was happy to see that people wanted to come out and support the project and see it through.

Pohl hosted a skate meet on April 30 for riders of all kinds to skate onsite in support of the project. More than 20 skaters and snowboarders showed up, despite overcast skies and cold weather.

He interviewed several attendees, all of whom talked about the benefits of bringing a skate park to Big Rapids.

“I think it will inspire more young people to get out and be active,” Pohl said. “Maybe the kids who don’t play sports in school but love skateboarding, this will give them a place to go. It’s so important to inspire kids to be active and (to experience) the accomplishments you can have with skating and horseback riding.

The grant competition began in 2019 to reward ideas and provide critical funding for projects being developed in small towns across Michigan’s Lower Peninsula. Communities of up to 10,000 people could apply.

Black said the grant money would be helpful in moving the skatepark forward with realistic plans.

“We’re hoping to have a concrete slab with above ground ramps and skateable devices,” Black said. “For phase two, we can hopefully do an asphalt pump track. What this funding really allows us to do is move forward with confidence, and there is still more fundraising and grant applications to be done. It puts us in a much stronger place to get there.

“Not only would it be a powerful place for young people to connect and make friends, but even for people who might be struggling with family issues at home or struggling with a substance use disorder, it can be a space to really come and play. and be a healing space,” she added. “By making this available to people, it has its own unique impact that cannot always be achieved by other projects.”

On March 9, the project group organized a get-together with the skating community at City Hall, where participants shared different features and devices they would like to see in this skatepark.

Project leaders hope to connect with residents and community leaders to create a collaborative space. They plan to include artwork in the space in some way and showcase the Big Rapids art scene.

They also plan to work with The American Ramp Company on designing the ramps and keeping safety in mind for the park.

Black said the location was already in good condition to be very safe.

“With Sweet Hill Park’s current location, it’s right next to a road that’s already very well lit,” Black said. “The parking lot is also well lit, so especially considering the use during the night hours, that’s something we really think about. As for the barriers around the skatepark, that’s something we’re working on in collaboration with American Ramp Company based on their expertise, to guide us on what might be the best practices to address this.

For more information on the project, check out the BR Project Skatepark team Facebook group for progress updates.