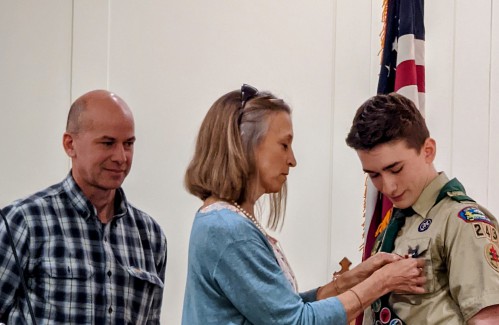 Bradley J. McIntire, a member of Scout Troop 243 in Gilford, received the rank of Eagle Scout, the highest rank in Scouting, during a ceremony at the Gilford Community Church on April 2. Bradley is a senior at Gilford High School where he was class president for four years, captain of the tennis team and captain of the Belmont-Gilford hockey team.

Bradley has been a member of Troop 243 for seven years, and to achieve the rank of Eagle, had to rise in rank, serve in a number of leadership roles in the Troop and earn 21 merit badges in areas such as first care, emergency preparedness, wilderness survival, citizenship, etc. He also had to show leadership by planning, developing and carrying out a community service project. Bradley’s Eagle Scout project involved making long-needed improvements to the Arthur Tilton Ice Rink in the Town of Gilford and included replacing and painting the bleacher seats; build shelves where skaters can store their shoes and other personal items; and significantly upgrade the walkway so skaters can now walk safely from the bleachers to the rink. At the Eagle Scout Awards ceremony, Bradley said “Scouting has been a big part of my life and has taught me how to be a leader and a good citizen.”

Bradley’s parents, Jim and Martha McIntire, said, “We are very proud of Bradley’s achievement in attaining the rank of Eagle Scout. It has been wonderful to watch him grow into a leader both in scouts and in school.

Courtney Kelly, Scout Leader of Troop 243, said, “Bradley is an exceptional scout and a great young man. He has always been a real asset to the troop and as he has grown into one of the oldest Scouts he has been an excellent leader and mentor to younger Scouts. Bradley will continue to serve as a leader after attaining the rank of Eagle Scout and graduating from high school while attending United States Military Academy Preparatory School with a view to entering West Point next year. in the class of 2027, after which he will serve our country. as an officer in the US Army.

Only about five percent of all Boy Scouts earn the rank of Eagle Scout. Troop 243 meets every Wednesday evening at 7 p.m. at Gilford Community Church. Anyone interested in Scouting is welcome to come to a meeting.

Best Ways to Find Every Secret Skate Tap in Limgrave