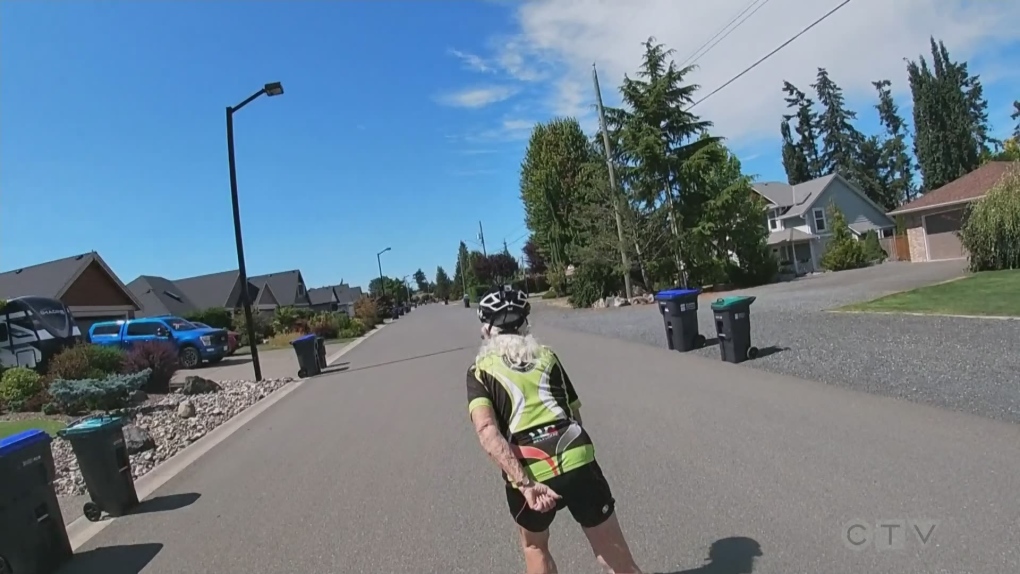 While pondering what to do for her upcoming birthday, Sonya Bardati knew what she didn’t want to be.

“I’m not going to be a rocking chair grandma!” Sonya remembers saying.

So she stared at her life so far.

“I want to dwell on the good stuff.”

Instead of dwelling on the tears shed growing up in an orphanage, she recalled the smiles that were inspired there, while playing on roller skates.

“We did a show (which included moves like) circles, planes, and the finale was the split,” Soya recalled. “It was great.”

So Sonya decided to don a pair of inline skates for her 80th birthday.

“It’s fabulous,” Sonya says, while skating down the street. “You feel like you’re in a cloud.”

But that was just the beginning.

“When I decide to do something, I do it,” says Sonya.

Like when she decided to start working at 15, join the Royal Canadian Air Force at 18, and become the first woman to graduate from her university as a Certified Industrial Accountant, Sonya decided to embark on a road skating trip for her birthday.

She planned to travel Port Hardy to Parksville on Vancouver Island in seven days, or more than 350 kilometres.

“My motto is: I can do whatever I want as long as I don’t hurt anyone,” says Sonya.

But what about hurting yourself? And his asthma? Or what about osteoporosis that has caused Sonya to break 10 bones in the past six years?

But Sonya faced her fear and started training five days a week because she said this trip was bigger than her.

Sonya wanted to give back to her adopted cat, Holly.

After the death of her husband of more than 50 years, Sonya says Holly was a crucial comfort.

“She kept me from collapsing,” Sonya says.

So Sonya turned her trip into a fundraiser for the SPCA.

But she wasn’t done partying. Sonya also skated in a different costume each day, dressing up as a showgirl in fishnet stockings and a hippie with peace signs and a flowery headband, among other things.

“I am crazy! Sonya laughs. “I like to do things that make people happy!”

And after reaching her birthday goal, Sonya says she learned that the best way to celebrate every day is to improve yourself, so that you can be better to others.