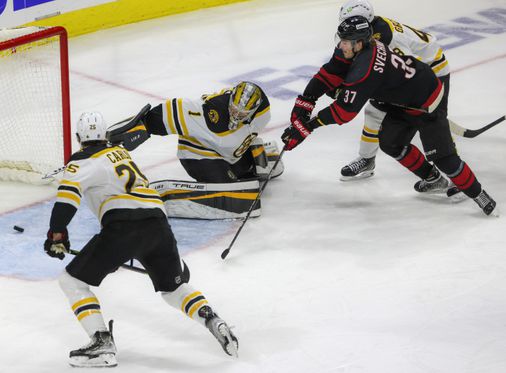 ▪ The Bruins couldn’t stay out of the box, even though some of those calls were questionable, and they weren’t quick enough on the penalty kill. They cut short two of their power plays with their own miners. For as bad as they are outscored (12-5) to five-on-five in this series, they can’t afford to let the Hurricanes go 2-for-5 on the power play (with 11 shots).

The latest sports headlines from The Globe delivered to your inbox every morning.

They also generated little on their own power play (0 for 3, three shots). Not a recipe for success. What is most worrying: the lack of skate pop seen on either side of the lineup. Some Bruins are clearly sick — see Craig Smith limping to the bench — but as a team, they’ve seemed a slow step, a beat behind the accelerated Canes. When Taylor Hall broke away from David Pastrnak on a 2-on-1 midway through the third, Slavin carefully swallowed Hall’s cross feed.

▪ The most energetic moment for the Bruins all night was when defenseman Connor Clifton joined the run and put one between Antti Raanta’s pads at 10:09 of the third. It was the first goal by a Bruins defenseman in this series.

▪ The Bruins spent little time in the attacking zone and the Hurricanes recovered quickly to stop their breakouts. Their best looks came in the first period, when they had seven high-danger chances (compared to Carolina’s two), per Natural Stat Trick. Brad Marchand will kick himself for a game early on. He was alone in front with Raanta, had time to cut the backhand, fake a forehand and lift a backhand. Raanta stopped him with the cuff of his glove.

▪ Grade-A seems overthrown in second (10-2, Hurricanes). Swayman made 24 saves in 40 minutes, holding off the Bruins as they tried to solve the Canes defense. He was OK, but gave up a few too many rebounds…and his first goal against was a softie.

After Andrei Svechnikov drilled through Matt Grzelcyk to put the Bruins out of position in the defensive zone, Tony DeAngelo raced down the blue line and threw a nifty backhand to partner Slavin. The ensuing wrist shot from the circle leaked through the goalie at 6:11 of first. The Hurricanes have scored first in all eight games this year.

▪ It’s not hard to figure out why the Hurricanes scored a power play goal to make it 2-0. The Bruins, who had done well blocking and throwing forward shots from the point in Games 3 and 4, left DeAngelo open for a one-timer. The puck deflected off Charlie McAvoy.

What’s curious is why the Bruins were killing a penalty in this situation. Derek Forbort was whistled for brutality after a scrum that saw him fire an extra shot at Max Domi. Forbort had grabbed Domi after the Hurricanes winger fired first. Why referee Jon McIsaac didn’t send them both is a mystery.

▪ The first period eluded the Bruins, who were trailed 10-3 by the Hurricanes’ first goal. Rollovers were a problem early on, with the Hurricanes coming close to making several breakaways. Towards the end of the period, a tired Clifton made a backhand cross pass to his partner, and Jordan Staal collected it for an easy Grade A chance.

▪ Luck certainly wasn’t on the Bruins’ side in Game 5. At 15:52 of the second, the Hurricanes made it 3-0 on this bizarre play: Brandon Carlo’s punt attempt hit Jake DeBrusk’s skates and the puck flew off Swayman’s shoulder.

▪ McAvoy, a surprise comeback from COVID protocol, looked like himself. He recorded 6:30 p.m. in two periods. McAvoy arrived at the rink at 4:40 p.m., shortly after taking a private flight to Raleigh, and on his first shift he hit Svechnikov, won a puck battle and made a quick hit on the boards to put the Bruins on the rush. On his next shift, he was behind the Hurricanes goal. Next shift, more of the same.