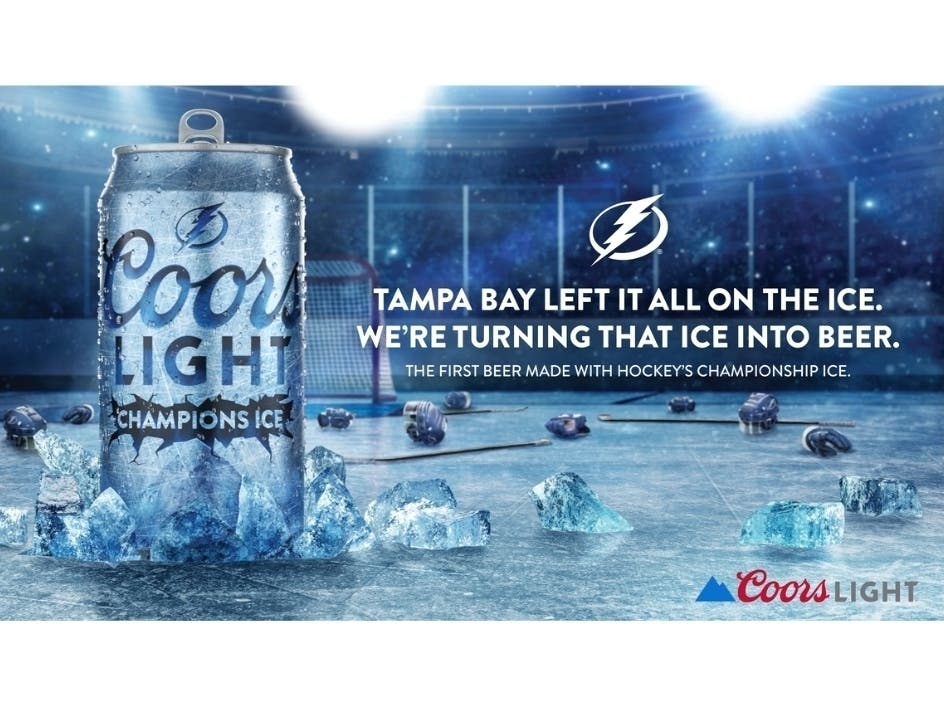 TAMPA, FL – Starting Monday, Tampa Bay Lightning fans can celebrate the team’s Stanley Cup championship victory with a limited-edition beer made with ice from a final game of the Stanley Cup at the Amalie Arena.

Coors light used ice collected from the Arena Amalie rink during the Stanley Cup Final to prepare for the Champions Ice. The beer will be available on draft at bars in the Tampa area and in 32-ounce collectible crowlers.

During Game 1 of the Finals at the Amalie Arena, Coors Light quietly scraped and scooped the actual ice from the rink and transported it to their brewery in Golden, Colorado, to make the victorious Champions Ice beer. Coors Light has filtered the ice during the brewing process, ensuring a refreshing, fully purified drinking experience for those lucky enough to get their hands on Special Edition beer.

The Arena Championship ice has been purified using reverse osmosis membrane ultrafiltration technology, a purification process that meets Coors Light’s high standards. Ice was mixed with Coors Light beer to make it the only beer ever to be brewed with championship ice.

“As the official brewing partner of the Tampa Bay Lightning, we are proud to celebrate the team’s second consecutive championship victory by giving Bolts fans a taste of the action,” said Marcelo Pascoa, vice -President of Marketing for the Coors family of Marques. “We’re no strangers to the magic of ice cream, both in the arena and outside. And now we’ve taken that ice cream and brewed it into a refreshing beer.”

The brewery has produced a series of 55 half-barrels of beer that will be distributed to Coors Light accounts in Tampa. Steele said he hopes the unique beer will bring Lightning fans to bars and other establishments still recovering from the coronavirus pandemic.

Skate the Lake returns to Tahoe