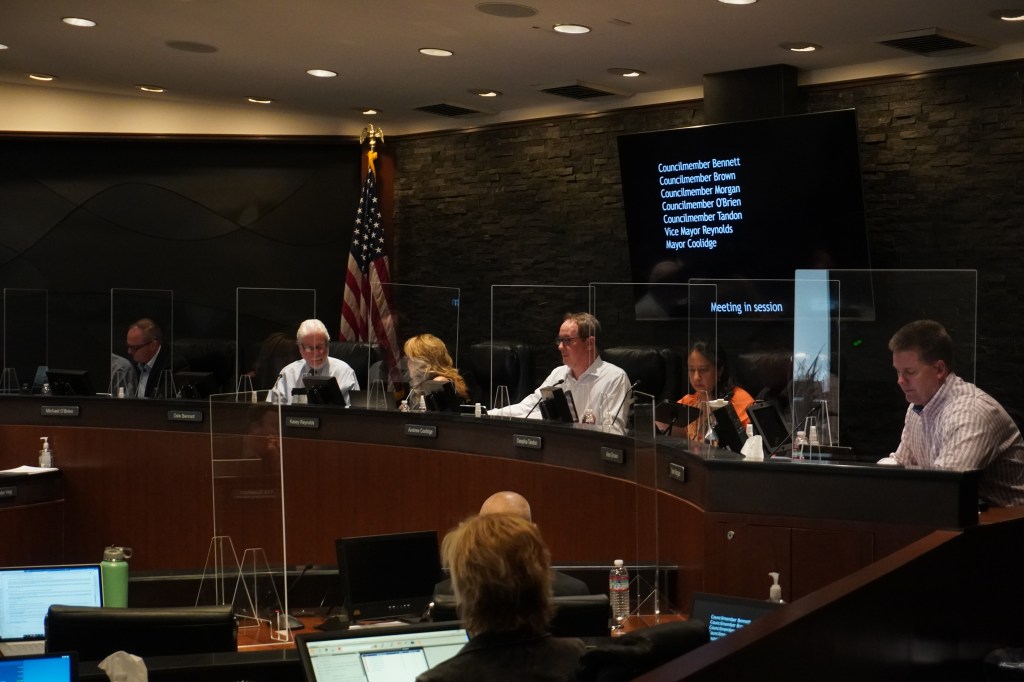 CHICO – After a month-long hiatus, Chico City Council resumed Tuesday evening with a main talking point on the agenda for final reading: amending the city code.

The amendments created divisions among the citizens of Chico, significantly in the last council when they were presented at first reading. The amendments were once again given a final reading and passage on Tuesday before going 4-3 without the support of Deputy Mayor Kasey Reynolds, Councilor Alex Brown and Councilor Deepika Tandon.

Among the changes: redefining “accommodation space” and “camp”, changing the rules for storing personal property in public space, clearer definitions of how the police interact with homeless people and decisive guidelines on what is considered an open shelter.

“As I mentioned on first reading on this point, the city ordinances had been criticized by Judge England, several community services and the ACLU,” Ewing said. “This is what I would describe as a ‘cleaning order’. It is not about running out and starting to enforce these ordinances.

Additional appropriations and budget changes were also discussed by council after being presented by Public Works-Engineering for the transfer of funds from an existing capital project to a new municipal recreation fund.

The changes relate to a potential ice rink in downtown Chico. Public Works-Engineering said in its report that the change will allow fundraising staff to track revenue from sponsorships, rink admissions, rink rentals and special events. The potential opening date is set for November 19 and would run for eight weeks.

After councilors discussed the possibility of the rink being affected by the COVID-19 pandemic, the current downtown area not housed and the details of the contract with the rink supplier, the item on the agenda was been delayed. It will be reintroduced at the next council meeting with more information regarding the contract and the impact of the ice rink on the environment. The reintroduced element passed 7-0.

Nichole Nava spoke to council about the potential rink and concerns about the downtown location, citing homeless people at City Plaza.

“I support the things that are good for Chico. Hopefully we’ll get our act together by then, ”Nava said. “What are we going to do to make everyone feel safe? “

Jesica Giannola spoke to council and said the rink looked unpleasant during an ongoing housing crisis.

“We are currently experiencing a housing crisis. Focusing on an ice rink when we have a heavenly ice rink doesn’t seem right. It’s like a slap in the face of (the city’s) needs, ”said Jesica Giannola. “Why do we live in two separate worlds? It is simply not appropriate. It sounds like fun, but it’s just not our reality right now.

A review of the proposed US Rescue Plan Youth Grant program was also approved and the final allocation decided. The program received an allocation of $ 500,000 to be spent on youth.

On the advice of Vice Mayor Reynolds and Councilor Morgan, funds for the program will be split 70-30, with 70 percent of the funds going to repairing fences along the nearby Union Pacific Railroad cycle path, extending from avenue W. Lindo to Chemin de Rio Chico. Due to its proximity to the state of Chico, many students use the bike path to get to and from class. The remaining 30 percent of the funds will go to three or less nonprofit organizations supporting young people. It went 6-1 without the support of Councilor Brown.

The director of human resources and risk management, Jamie Cannon, also made a request to the city for a change in the salary scale of the rangers. Currently, the maximum hourly wage for a sworn ranger is $ 26.13 per hour, with the new recommended maximum wage being $ 37.77. For a senior sworn ranger, the hourly wage is currently $ 30.52, with the new recommended maximum wage being $ 44.19. The motion was carried 6-1 without the support of Councilor Brown.

The council also voted to fill vacancies for the city’s Airport Commission and the Architectural Review and Historic Preservation Board.

For the Airports Commission, Marc Breckenridge and Martin Nichols have been selected for a two-year term.

For the Architectural Review and Historic Preservation Board, Georgi Bellin and Thom Thomson were selected for a four-year term.

The board also approved:

The next regular meeting will be on Tuesday, September 21 at 6 p.m. in the City Council Chamber at 421 Main Street.