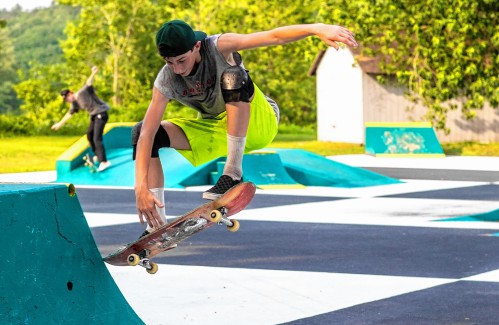 As the heat of the day gave way to afternoon shadows, the dirt parking lot began to fill up. A tree with branches laden with shoes blocked the sun on a now occupied picnic table. As the shadows crossed the park, the skaters came out. Soon the sound of busy Loudon Road was replaced by the thumping and squeaking noises or the occasional bark that precedes a fall.

Concord Skate Park is nothing fancy, but it remains a draw for skaters of all ages who take pride in the area and want their sport to thrive.

While there are plans for a new park, skaters are currently making do with the 20-year-old park and its concrete ramps.

Among the skateboarders is Eric Dasaro, recognizable by his little dog Fran, with whom he shares his skateboard. Dasaro, 32, has been going to the park since he was a child and is one of the skaters who run the park.

“We started painting the park last year because it was filled with graffiti and dangerous skateboarding obstacles,” Dasaro said. One of those obstacles was what’s called a traffic jam, which is a steel rod sticking out of the ground at an angle for skaters to crush. It was previously installed by skaters and the city has asked the skaters to remove it.

Mac Wolfe came from the Lake District because he loves the Concord skating community.

“There are skate parks where I am, but there isn’t the community that we have here at Concord,” said Wolfe.

Concord skaters keep the area clean. They feel a sense of belonging.

“They really take care of the park, they try to clean up after themselves,” Wolfe said. “Sometimes we get people from the outside who will come and do graffiti and we will just cover it up.”

Their last effort was to repaint the park.

The base of the park is painted as a large black and white checkerboard pattern and the handrails are aquamarine with green highlights.

Another renovation was to commemorate Jon Smith, a skater who died in 2018. His name is displayed on a plaque on the picnic table under the tree filled with shoes.

Work has started to change who comes to the park.

“After we started painting it last year, we started to see more parents and children coming here and this is the future,” said Dasaro.

Carter Cutrer, 13, said he liked the ramps in the park and his current paint job. Teigan Mason, 15, said skaters young and old treat each other with respect.

“We know pretty much everyone,” Mason said.

Wolfe said he loved skateboarding because of his more important lessons.

“It teaches me that it’s okay to fail because you fail over and over and get hurt,” Wolfe said. “What you get for a successful turn keeps you going.”

This community of skaters has also started to advocate for a new park.

According to Parks and Recreation Director David Gill, the idea was discussed at a recent meeting.

“A group of adults and kids got together and came to the recreation park advisory board last month and said hello, we would like to help the city get ready for the (new) skate park,” he said. Gill said.

Gill praised the skateboarders at the current park for keeping the place in good shape.

“The skateboarding community over the last year and a half has done a great job of maintenance, they are monitoring the trash themselves. I think it’s an intergenerational place now, ”said Gill.

Over the next six to eight months, the details of the new park will be decided in conversations with the community, said Gill. The cost of the park and how it will be funded have yet to be determined.

Gill believes that interest in skateboarding will continue to grow.

“I think it’s exciting, this summer is the first time skateboarding has been an Olympic sport,” said Gill.