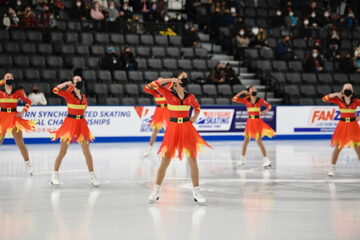 Skating on the youth line, Gisela and Larena performed a ‘heroic’ routine, receiving their best score of the season and a 3rd place the bronze medal. Gisela also skated the middle line and competed in a Michael Jackson shuffle, finishing first out of 13 teams and winning a gold medal and the title of Eastern Midsection champions.

Synchronized skating (“synchro”) is a discipline in which a group of skaters perform as a team, moving across the ice at high speed, executing complex footwork and elements, while maintaining precise formations and timing. Synchro is a growing sport and recently went through an Olympic eligibility review.

Gisela and Larena practice their individual free skating before or after school during the week at the Westchester Skating Academy in Elmsfordand practice with Image synchronization the weekend at Cooler in Hackensack (NEW JERSEY).

The sisters come from a family of ice skaters. Their mother, Cortlandt Town Justice Maritza Fugaro-Nortonwas a competitive pair skater, their aunt was a synchro skater, their grandfather was an ice dancer, and their younger brother is a hockey player with the Westchester Vipers.