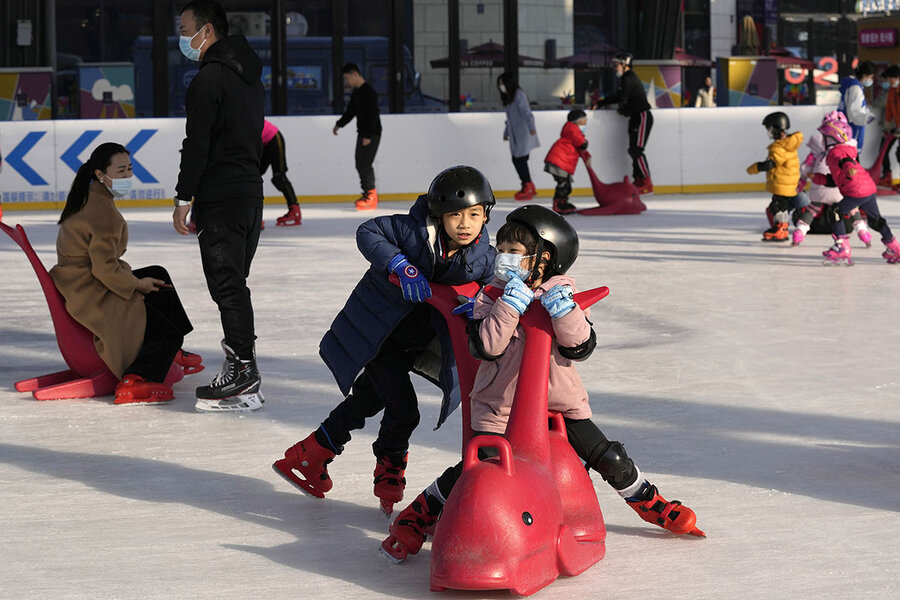 Figure skating is learning to fall and get up

Born and raised in Beijing, I started skating when I was 8 years old. The first time I walked on the ice, I slipped carefully, trying not to fall. “Be Bold!” shouted my father. “Take another step!”

But when I did, I fell – again and again at first. I spent my free time at the ice rink, practicing endlessly. Two years later, I had had enough. The pressure was too much.

Why we wrote this

A child’s eagerness to meet parents’ expectations can become too much of a burden to bear. But it is a burden that can be lifted by love.

For the next 10 years, I didn’t skate at all. But when I returned to Beijing in 2019 during winter break from college, I came across a new pair of figure skates my dad had bought me. “I thought you’d end up wearing them,” he said. This thought had never occurred to me. Still, I brought the skates back with me.

This winter, inspired by the Olympics, I put on my skates. I carefully walked on the ice of a Boston rink. This time skateboarding was like it was when I fell in love with it. I slipped and danced. I was without pressure, free, happy.

To learn to skate, you have to get up after a fall. I had fallen 10 years ago, and now I have risen.

“Be Bold!” I hear my father calling. “Take another step!”

My roommate and I sat very quietly and held our breath to watch the showdown between ice skaters Yuzuru Hanyu of Japan and Nathan Chen of the United States, as if our contractions or breathing might interfere with their schedules at the Olympics. Beijing winter. But when Mr. Chen launched himself into the air, it wasn’t his quadruple flip that caught my eye – it was the empty upper deck seats behind him.

They looked familiar. And then I realized that the competition was taking place at the Capital Indoor Stadium in Beijing. These seats were where my parents had sat, my dad holding a video camera to record my daily workouts so we could review every twirl and spiral.

Born and raised in Beijing, I started skating when I was 8 years old. I remember the first time I walked on this rink; I carefully slid forward, my toes pointed inward to keep myself from falling.

Why we wrote this

A child’s eagerness to meet parents’ expectations can become too much of a burden to bear. But it is a burden that can be lifted by love.

“Be Bold!” my father shouted to me from that balcony. “Take another step!” His stentorian voice echoed in the arena.

But as soon as I tried to do so, I lost my balance and fell – again and again. It’s a lot harder than it looks, I remember thinking.

I had seen the bronze medal performance of Chinese pair skaters Shen Xue and Zhao Hongbo at the 2006 Winter Games in Turin, Italy. They inspired a wave of national pride and made figure skating a mainstream sport in China.

I joined the rush. Even as a young girl, I saw skating not only as a sport that combines athleticism and aesthetics, but also as my ticket to one of the best colleges in Beijing. Even though my coach told me that I had started skating too late to enter elite competition, I was convinced that one day I would be like the skaters I saw on TV.

The “kiss and cry” area for skaters at the Beijing Winter Olympics was where a wide corridor used to be. Then it was a crowded place with kids like me and their parents. The young skaters warmed up before practice as their parents anxiously hoped their child would make it to the top.

I spent most of my time outside of school at the rink. There, my skater friends and I laughed as we raced backwards. Again, I held back tears when my coach yelled at me for bad footwork. That’s where I stayed after my classes to constantly practice spirals and toe loops.

Then one day, two intense years later, I had had enough. The pressure was too much. I told my parents that I couldn’t take it anymore.

Fortunately, my loving father and mother understood. They let me stop. But even after quitting, the guilt and pressure stayed with me. My parents had sacrificed so much for me, and I felt like I had disappointed their expectations. I also felt like I had lost part of my identity; skating had set me apart. Could I expect to be considered for a top-notch school without it? I often had doubts about myself, and that made things worse.

My fear of not getting into a competitive college was unfounded. For the next 10 years, however, I didn’t hear the creak of my skates biting into the ice. My after-school hours were filled with tutoring in math and English. I started a new sporting activity – cross-country running – which I still pursue today. More importantly, I no longer forced myself to do something that I didn’t feel in my heart.

Even so, I still enjoyed watching figure skating on TV from time to time. I admired the hard work and accomplishments of the skaters. They were living the dream I had.

Just before the pandemic shutdowns began, I returned home to Beijing during the winter vacation from college in the United States. In my closet, I was surprised to find a new pair of figure skates that my father had bought me. The blades had been freshly sharpened.

“I thought you’d end up wearing them,” he said confidently. “It’s just a matter of time.”

I shook my head. This thought had never crossed my mind. Still, I brought the skates back with me to Boston.

This winter, inspired by the Beijing Olympics, I put on some skates again, the skates my father had bought me. I carefully walked on the ice of a Boston rink. And this time skateboarding felt like it felt when I first fell in love with it. I slipped and danced on the ice, feeling free and happy. I was skating without pressure, without winning or losing.

Get stories that
empower and uplift Daily.

To learn to skate, you have to get up after a fall. You can’t learn without failing sometimes – or often. I fell again, but 10 years later I finally got back up. I hear the echo of my father’s exhortation to me, little girl:

“Be bold! Take a step further!”