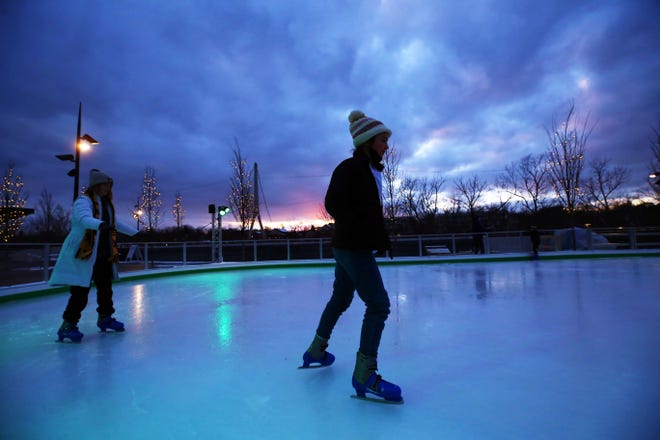 Kyle and Samantha Gandee were expecting friends to join them for an evening of ice skating on January 7 at the temporary outdoor rink in Riverside Crossing Park in Dublin, but instead, the Columbus couple ‘Olde Towne East enjoyed an impromptu evening.

“Our friends were supposed to be with us,” Kyle Gandee said, but they were among the growing number of people who contracted COVID-19 as the latest variant of the virus caused a further rise in the number of cases.

It was the first visit to the Dublin Ice Rink for Kyle, 31, and Samantha, 30, who said she learned about it from her colleague, who lives in Dublin.

It was also the couple’s first ice skating in three years, said Samantha Gandee, who learned to skate on a pond at her parents’ home in Mount Gilead.

“I grew up skating (on an ice rink in Cleveland Heights) with my grandfather, who took me out skating with his friends,” said Rush.

As her son, Jackson, moved skillfully on the ice, using the skills developed playing ice hockey at the Chiller indoor rink in Dublin, Lyla took the opportunity to develop her balance on skates.

“She’s finally getting used to it,” Rush said.

Another first-time visitor came from Westerville to try out a new pair of ice skates.

“I wentogle ‘the outdoor rinks in Columbus’ and found this,” said Katie Vance, 27.

Vance said she liked being outside because “it feels more like winter.”

The Jan. 7 skaters had plenty of room to move on the ice, but that’s not always the case.

There are times, including the week between Christmas and New Years, when all of the rental skates are in use and none remain available, said Taylor Sara, district manager for Out of the Box Enterprises LLC, owner of the temporary ice rink.

The ice rink opened on December 17 in the park, 6635 Riverside Drive, and is located in the lower plaza on the east side of the Dublin Link pedestrian bridge.

Updates on the hours will be provided on the city’s website, dublinohiousa.gov.

The concept of an ice rink was considered early on in the design process for Riverside Crossing Park, said Matt Earman, director of Dublin Parks & Recreation.

Out of the Box Enterprises responded to a request for proposals and demonstrated their experience in owning, operating and maintaining similar facilities in other cities, which led to the recent installation of the ice rink. , Earman said.

Out of the Box Enterprises also operates ice rinks in Cleveland, Sara said.

“The rink was delivered disassembled and assembled on site over a period of five days,” said Earman.

Admission is $ 10 per person and includes skate rental.

Skaters are welcome to bring their own skates but still must pay for admission, Blaine said.

The rink is equipped with cooling equipment that allows it to operate in temperatures of up to 60 degrees, she said.

The rink will be closed if skating conditions are unsafe.

Visitors can see in real time if the rink is open by visiting dublinohiousa.gov.