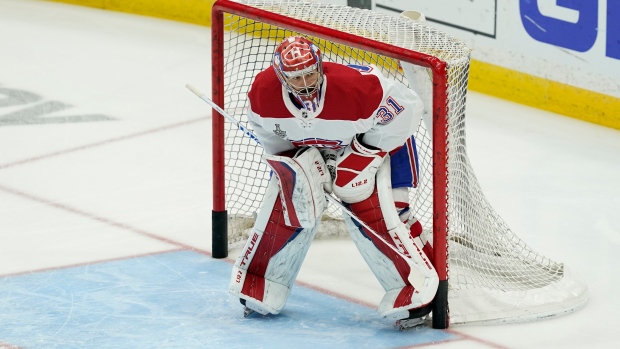 BROSSARD, QUE. – The Montreal Canadiens had a big surprise in store Thursday after day two of rookie camp at the Bell Sports Complex in Brossard: star goaltender Carey Price skated for the first time since going under the knife earlier this summer.

Under the supervision of an instructor, Price performed stretching exercises and lateral movements for approximately 10 minutes.

Price underwent knee surgery on July 23 and was scheduled to be away for 10 to 12 weeks. Camp is scheduled to begin on September 21 with medical tests and players will be hitting the ice the next day.

It would be an early return for Price: 10 weeks of convalescence will take him to October 1.

Price’s return somewhat eclipsed the Habs rookies, who were gathered on the ice for the first time Thursday morning under the supervision of new Laval Rocket head coach Jean-François Houle and his coaching staff from Kelly Buchberger, Martin Laperrière and Marco Marciano.

It was also a first experience with the Habs for Houle, who has spent the last six seasons with the Edmonton Oilers as an assistant coach with the Bakersfield Condors of the American Hockey League.

It should be noted that forward Jesse Ylonen, who played a game with the big club last season, was not on the ice for the occasion, but the Habs have indicated that he should be there on Friday.

The players were separated into two groups – Red and White – and participated in several exercises simulating phases of play.

In addition, twenty other players, including newcomer Christian Dvorak, trained simultaneously on the second rink for the official Bleu-Blanc training camp.

The rookie camp will continue on Friday at the Bell Sports Complex in Brossard.

It should be noted that the practices and games presented in Brossard are not accessible to the public.

– This report by La Presse Canadienne was first published in French on September 16, 2021.