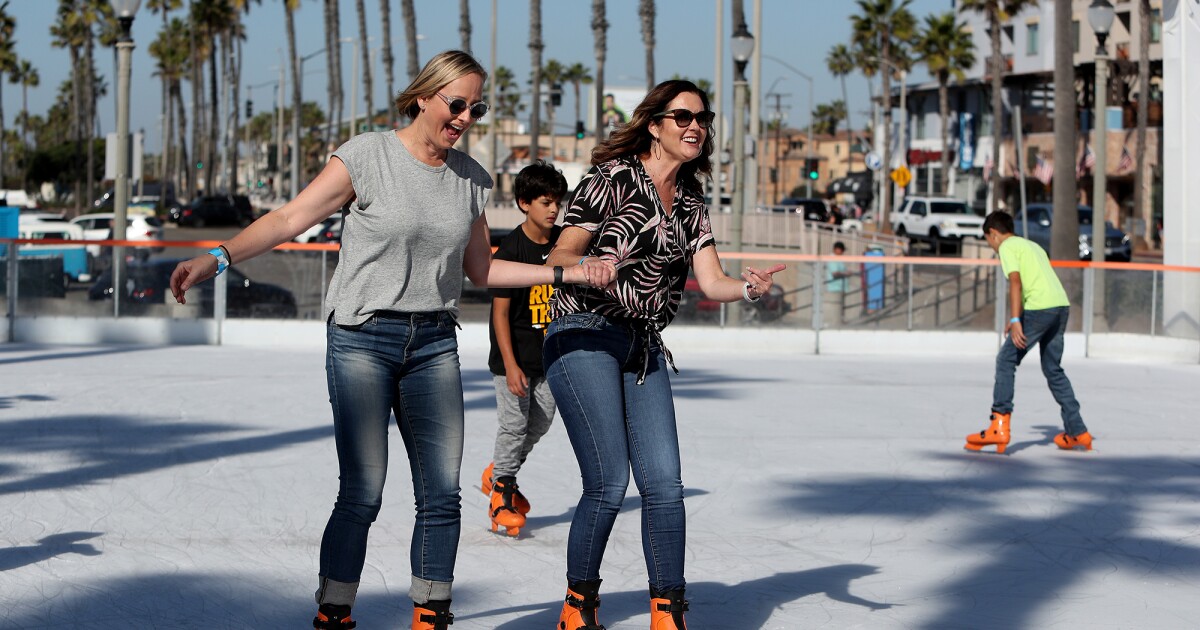 The juxtaposition was remarkable.

As Huntington Beach city officials and children moved around an outdoor rink at Pier Plaza on Wednesday morning, beach volleyball players clashed in the area just below them to the west .

A little further on, surfers caught waves in the Pacific Ocean.

â€œSeriously, where else can you ice skate and check out the surf at the same time? Said Mayor Kim Carr. â€œThis is the epitome of Huntington Beach. I really think it comes down to what we’ve been talking about all year, which is having that â€œalohaâ€ spirit and really making Huntington Beach a family destination.

Snow and ice are far away from Surf City in most winters. But this year, the city brought ice cream to the beach.

Surf City Winter Wonderland, an outdoor rink, opens to the public at Pier Plaza on Friday. A smooth opening took place on Wednesday.

Those looking to cut off some of those vacation calories look no further.

Carr managed to avoid any spills as she skirted the ice, alongside MP Janet Nguyen and City Councilor Natalie Moser. Many officials brought their children to join in the fun.

There were also plastic objects in the shape of reindeer and seals on the ice, to sit on or for guidance.

â€œI used the seals a lot, because I can’t really skate,â€ Moser’s sixth-grade daughter Riley said with a smile. â€œI learn as I go. “

City council has approved a three-year contract with Ice-America to operate the site, said Huntington Beach community and library services manager Chris Slama. The total cost is approximately $ 500,000, of which approximately $ 150,000 is for the first year.

This is the first time the city has set up an ice rink at Pier Plaza, although another is also open to businesses nearby at the PasÃ©a Hotel, as in the past.

Slama brought his wife, son Casey, 12, and daughter Kaitlyn, 6, to join the fun on Wednesday.

â€œThis year, after what we’ve been through with the pandemic, we spoke with our city council and our leaders about what we could really do to get our community out this holiday season,â€ he said. â€œWe found other cities that had done something similar. Of course, we were like, â€œWow, what a great opportunity with the beach as a backdrop. “

Pro Tem Mayor Barbara Delgleize, who will be sworn in for her second term as mayor at the next city council meeting on December 7, missed the ice skating session. But she smiled as she watched the joy unfold. Growing up in the East, she said it wasn’t that rare for her to see.

â€œIt’s just something that normally we don’t have downtown,â€ Delgleize said. â€œOur kids can do it with their parents or skate with their friendsâ€¦ I hope the parents or families will say, ‘Hey, let’s go downtown.’ They have the ice rink, maybe they can grab a bite to eat. It’s a fun way to get people to come to the community.

Support our coverage by becoming a digital subscriber.