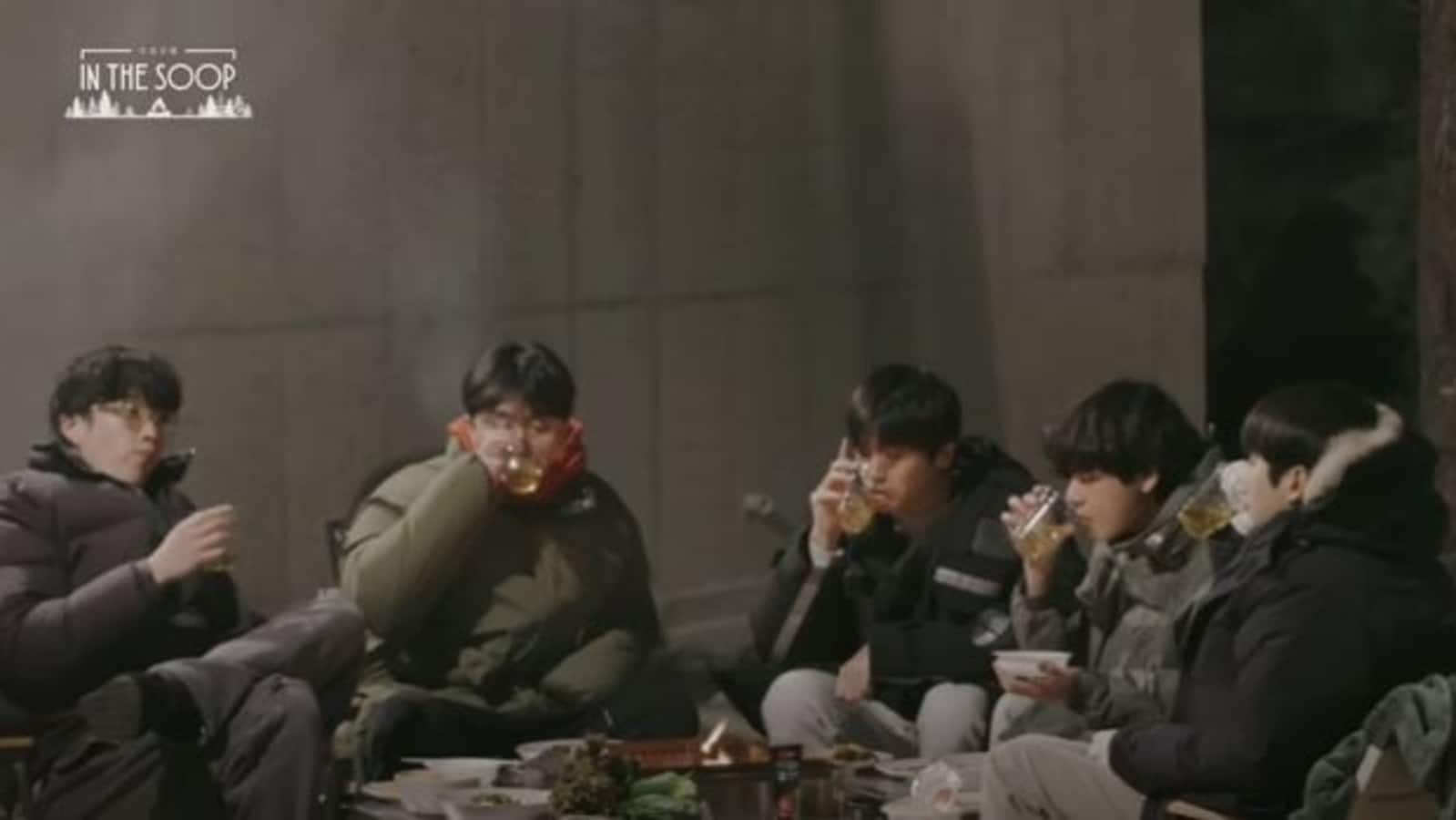 BTS member V, along with the rest of his Wooga Squad members, actors Park Seo-joon, Choi Woo-shik and Park Hyung-sik and musician Peakboy, went ice skating, fishing and had a great time in the latest In the Soop Friendcation teaser. Speaking to their YouTube channel In The Soop TV, the team released the “Official Teaser 3” on Monday. The friends also had some candid conversations, and the clip ended with V alias Kim Taehyung falling down. (Also read | In the first teaser for Soop Friendcation: BTS’ V, his friends from the Wooga Squad take a walk on the beach)

At the start of the video, Peakboy and Park Seo-joon joined Woo-shik, V, and Hyung-sik for a delicious meal. Referring to the concept of Wooga Squad being part of the series, Seo-joon asked V, “How did this happen?” A laughing Woo-shik said, “I haven’t even shaved,” while Seo-joon added, “That’s crazy.” Peakboy then asked the cameraman if everything was “impromptu”. V replied, “I just thought we could try it.” As everyone continued to laugh, Seo-joon repeated what V told him earlier, “Let’s do it,” and V said, “Trust me.”

The next part of the video reveals that V has planned a “four-day friendly trip” during this year’s winter season. Peakboy asked, “Are we just going to act like we’re having fun?” and Seo-joon replied, “Don’t play, just have fun.” The video then showed the friends suggesting activities for their vacation. Peakboy suggested fishing, Woo-shik said campfire, and V suggested ice skating.

Then Wooga Squad went fishing and said, “This is starting to look like a real trip.” Peakboy was shocked after he managed to catch a few fish. After that, BTS’s V and Seo-joon had fun inside an ice rink. They also laughed as they all bathed in a hot tub.

They also cooked a meal sitting outside and laughing while holding sparklers. As they sat around a bonfire, Peakboy spoke of a personal incident: “I never told anyone that, but I said, ‘Can you listen to me just once? ?” Woo-shik also shared, “This time I was really jealous.” Hyung-sik said, “I’m not good at expressing.” V said, “My walls have come down when I’m with you.” Seo-joon added, “Because we all know each other so well.”

At the end of the video, the members lay down together in a darkened room. Someone asked V, “Taehyung, are you crying?” Another person lifted the blanket from his face and said, “He is crying. A third person asked, “What? Why are you crying? What’s wrong?” The clip ended with a glimpse of their home. The show premieres July 22 on Disney+, and fans can watch new episodes every Friday at 11 p.m. (KST) (7:30 p.m. IST).