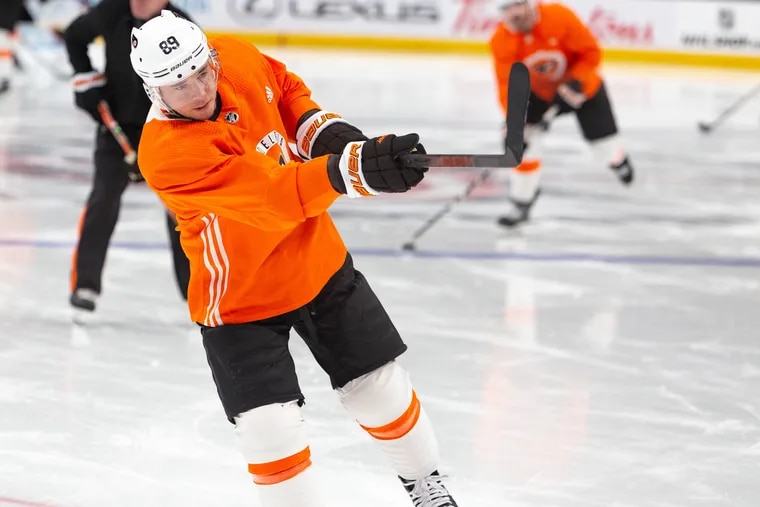 COLUMBUS, Ohio — When winger Cam Atkinson emerged from the tunnel before taking to the ice for the Flyers’ morning practice, his teammates greeted him with cheers, their voices and batting echoing through an empty national arena . Atkinson waved to the barren stalls in a grand entrance for a grand occasion, though few people were present to witness it.

Atkinson was an unknown guest in a very familiar place – the former Columbus Blue Jacket has been out with an undisclosed lower body injury since training camp (it was listed overnight on September 25) and he has been absent from the Flyers’ on-ice activities ever since.

” LEARN MORE: The softer side of John Tortorella: Inside the fiery trainer’s passion for helping animals in need

But Atkinson has shown he’s at the very least healthy enough to skate again, although his timeline for returning to the roster is unknown. The Flyers did not make him available for comment after the optional morning practice. It’s also unclear how long Atkinson has been in Columbus. During pre-season, coach John Tortorella said Atkinson had returned to the area to see a specialist he had worked with in the past.

Regardless of Atkinson’s uncertain schedule, his teammates cherished his presence ahead of the Flyers’ game against the Blue Jackets on Thursday night.

“I think the most important thing is that when he’s out there, the guys are excited,” winger Joel Farabee said. “He’s one of those guys, he always has a smile on his face. So having that around the rink really helps.

Atkinson is an integral part of the Columbus hockey community, having been drafted and played for the Blue Jackets for 10 years and establishing the Battery Hockey Academy, a player development and training center for local athletes. He still has a home in the area and Farabee visited him Wednesday after the Flyers landed in Columbus. Even when he’s not in the lineup, Atkinson does his best to rally his teammates.

Last season, Atkinson also worked to bring the team together on the ice. He won the Bobby Clarke Trophy as the Flyers’ most valuable player and served as alternate captain for the latter part of the season. He finished second on the team in points (50) and goals (23) in his first season with the Flyers following his trade to the Blue Jackets.

“He’s a kind of all-weather guy,” Farabee said. “He can play on the power play, PK. A guy like that is really helpful in the lineup. Someone I look up to and try to model my game after, in a way, with everything he does there.

But as much as the Flyers miss his presence on the ice, they miss his leadership off it. When Tortorella arrived in Philadelphia, he said Atkinson served as a “conduit” between him and the team as one of his former players in Columbus.

“We miss him,” Tortorella said. “He’s a great pro. But I think the only way he’s helped me so far is for me to go. And he kind of gave people some clues about expectations, especially training camp preparation.

Now Atkinson’s teammates are eager to see him back to full health, a luxury some Flyers haven’t been able to achieve. They are still missing key elements for long-term injuries, including the defender Ryan Ellis (pelvic injury) and center Sean Couturier (back).

“When someone misses games and they come back, it’s an exciting time for them,” center Kevin Hayes said. “I’ve been there. I hope he makes it 100% before he comes back…because it’s just a little risky. It’s exciting. It’s Cam. It’s a big part of our team and he hasn’t played any matches yet.

Carter Hart (.946 save percentage, 1.97 goals-against average) was the first goalie off the ice in the Flyers’ morning practice, indicating he’s likely the starter against the Blues Jackets. Tortorella did not confirm until morning practice that Hart would start. Hart missed Tuesday’s game against the St. Louis Blues due to illness, but returned to practice Wednesday. … Forward Tanner Laczynski, who played four years at Ohio State, is looking forward to his first professional hockey game in Columbus. “It’s like coming home a bit,” Laczynski said. “That’s where I spent four years, all my summers in college.”