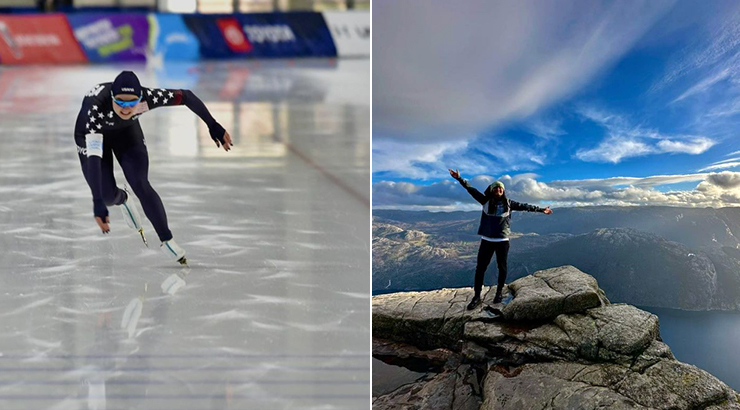 Kutztown University alum McKenzie Browne ’19 will represent Team USA at the 2022-23 International Skating Union (ISU) World Cup for speed skating. Brown will compete in six events this winter, starting this weekend, Nov. 10-12, in Norway, followed by events in the Netherlands, Canada and Poland.

This is Brown’s first time on the World Cup circuit. She will aim to improve and gain great experience as she aspires to qualify for an individual spot at the World Championships and ultimately the 2026 Olympics.

Originally from Coopersburg, Pennsylvania, Browne currently lives in Salt Lake City, Utah while training with Team USA. She has been skating on ice for four seasons and has a long and successful history with competitive inline speed skating.

Browne’s goal is to make the 2026 Olympic team. She grew up as an inline speed skater, where she trained most of her life in the Lehigh Valley. She started skating at Bethlehem Skateaway in 2003 and has since won 13 national titles. Browne also competed in track cycling from 2015 to 2019, before switching completely to long track speed skating. She raced at the Trexlertown Velodrome and competed at the U.S. Olympic Trials in January in Milwaukee, Wisconsin, placing sixth in the 500m and eighth in the 1,000m.

Browne knew she wanted to take to the ice when she saw several of her inline skater friends make the Olympic team in 2018. After that, she decided that once she graduated from KU in 2019, she would move on. in Salt Lake City. This was the start of her skating career.

Learn more about the ISU World Cup of Speed ​​Skating on line. A full schedule of events, with results, is available at https://live.isuresults.eu/events. Browne’s previous results can be found on her UIS profile.