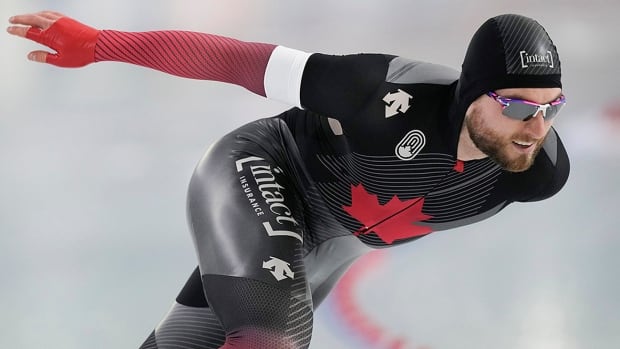 The 30-year-old from Quebec won the men’s race in 34.34 seconds in Heerenveen, Netherlands, after capturing a silver medal at the season opener last week in Stavanger, Norway.

Dubreuil, who won 10 of 12 races last season, fell 27 hundredths of a second off the track record on Saturday, set by Tatsuya Shinhama on March 8, 2020.

Wataru Morishige of Japan finished 11 hundredths behind Dubreuil on Saturday in 34.45 while Merijn Scheperkamp of the Netherlands was third (34.69).

WATCH | Dubreuil wins his first victory and his 3rd medal of the season:

Canadian Laurent Dubreuil took the podium after finishing 0.11 seconds ahead of Japan’s Wataru Morishige in the Netherlands.

Dubreuil opened this week’s event by finishing 10th in the men’s 1,000 on Friday.

Last Sunday, Dubreuil won his second silver medal of the weekend in Norway, posting the fastest lap of the field and clocking 1:09.22 in the 1,000m for his first World Cup medal in the away since January 2021 when he won bronze. in Herenveen.

Dubreuil stopped the clock in 34.75 to win silver in the 500m last Saturday in Stavanger, the first of six World Cup events scheduled for the season.

Laurent Dubreuil of Lévis, Que., finished fourth in his 500-metre race but still managed to claim the season championship.

Last February he won Olympic silver in the men’s 1000m after a disappointing performance in his signature event. Dubreuil finished fourth in the 500m in Beijing, the only time all season he missed the podium in the distance.

WATCH | The Canadians take silver in the team sprint:

Ivanie Blondin, Brooklyn McDougall and Carolina Hiller edged the American trio by just over a second in the Netherlands.

Blondin was also fifth in the women’s 1,500, with Dutch skater Antoinette de Jong posting a winning time of 1:53.73.