For the past several years, the Lincoln Center Skate Club has held a basic skills competition for lower level figure skaters.

But when the state’s figure skating clubs came together in November and decided to kick off the Indiana Figure Skating Championship Series, the LCSC jumped at the chance to host the first of four events.

“We are really excited to have the opportunity to host a larger-scale event,” said LCSC President Kevin Aker. “We have increased the size of our event this year to align with this new Indiana Figure Skating Championship Series. It was the past, it was a Compete USA event. It’s a beginner level, and it’s a simplified judging system.

This weekend, the LCSC will host the Columbus Invitational at the Hamilton Community Center and Ice Arena. Practice begins at 8 a.m. Saturday and competition begins at 10 a.m. Sunday’s action will start at 9 a.m.

Admission is free and open to the public.

“Our event this weekend actually has a panel of 16 officials from a five- or six-state region, and some of the events will be marked as you see them on TV,” Aker said. “We’re going to be able to showcase our facility at a level of judging that we haven’t seen in years.” 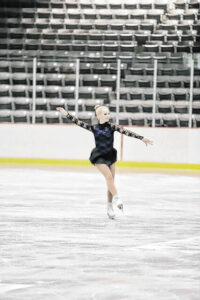 Aker, who is vice president of the Indiana Figure Skating Council, said the organization met in November and came up with the idea that instead of having just one championship event, it would have four host sites and would award points to each to determine a champion. The other events will take place in June in Carmel, in August in Fort Wayne and in September in Evansville.

“The intention is to drive participation at each of the clubs in the state,” Aker said. “The main thing this year is to put on a good show. The clubs will work together and we will figure out how to improve things in the future.

This weekend’s event will feature 99 participants, 55 of whom are from the Columbus area. The LCSC has 41 skaters competing, with the rest of the locals coming from the Learn To Skate program through Parks and Recreation.

Divisions will include senior and masters (adult) level, down to toddler and toddler levels.

Sunday’s competition will feature the most beginner levels.

“It’s exciting,” said Taylor Burdekin, one of the LCSC coaches. “For the past few years we have hosted a lower level event, so in order to be able to accommodate higher level skaters here, it will be nice to promote higher level skating throughout Indiana, which hopefully will what this series will accomplish. And it’s a chance for our skaters to show off their hard work to friends and family.

Burdekin is joined on the LCSC coaching staff by Katie Baxter, Emma Baxter-Valbuena, Liz Fernandes and Heather Lehnert. Burdekin and Lehnert are the co-chairs of this weekend’s competition.

“It was something we really wanted to be a part of,” Burdekin said. “We are really pleased to have been able to start on time and to be the first to launch the new series.”