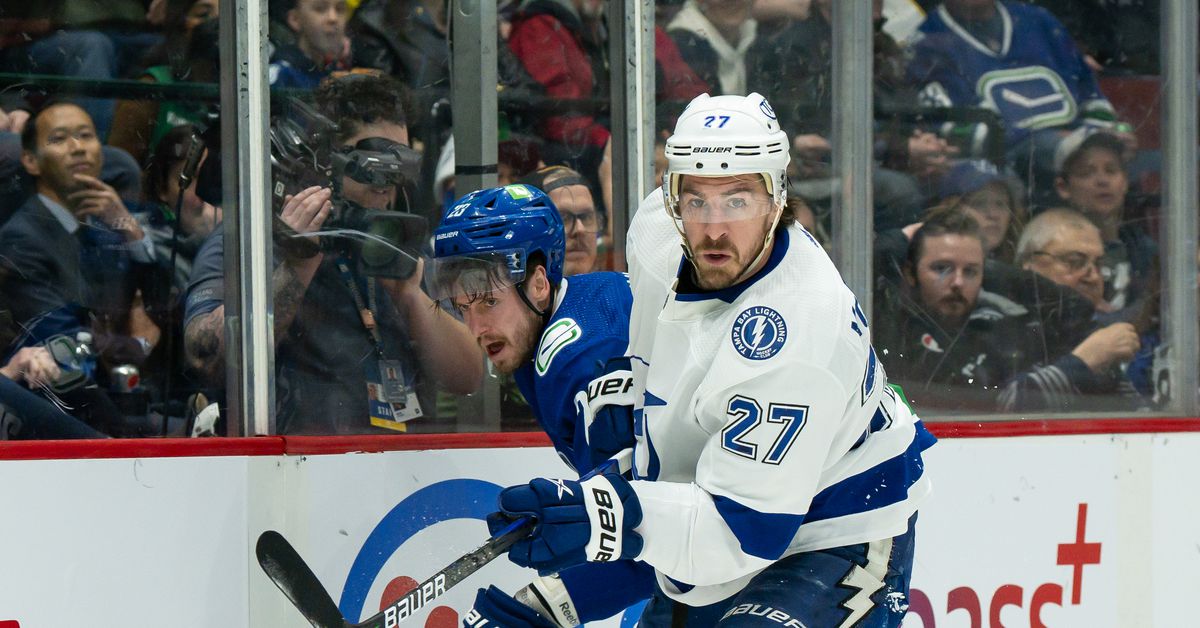 Ryan McDonagh has missed the last three games with the Tampa Bay Lightning with an upper-body injury, according to the team. After about a week, McDonagh is now able to start skating on his own as he progresses to playing speed. Jon Cooper estimates he will be ready to go in about a week as he transitions from skating alone to participation in training.

The Lightning are kind of at home right now, so McDonagh will be spending a lot of time at the rink.

#TBLightning Jon Cooper says Ryan McDonagh could be back in another week. He skates alone

Jon Cooper on the status of Ryan McDonagh, who missed three games with an upper body injury: “It’s progressing. He’s been on the ice to regain his conditioning. Hopefully within a week, but I would be happy if that happens”

In other Lightning news, the team signed defensive prospect Nick Perbix to a one-year ELC starting next season, with an ATO on the Syracuse Crunch for the remainder of the season. Perbix, 23, was drafted by Tampa Bay in the sixth round in 2017 and played for Team USA at the last Olympics where he recorded one assist in four games. [Raw Charge]

Back in Tampa Bay, Zach Bogosian was able to take his 3-year-old son for a skate around Amalie and the two had this sweet time together. Don’t hit too hard, Hunter, dad has to play in the playoffs.

Zach Bogosian on ‘fighting’ with his three-year-old son Hunter yesterday at the Amalie Arena: “He asked me if I wanted to fight so he wanted to. It was fun. You remember that age, of what it was, and seeing him love the game as much as I do, it’s like a proud moment for dad. pic.twitter.com/CzSsvnlwL0

CapFriendly adds new features to the site, including a past and future salary cap projection. Earlier this week, at GM meetings, GMs were told the cap would increase by $1 million for next year.

Remember when we shared that the NHL was planning to do a Reddit AMA with one of its referees? Turns out they came to their senses and canceled it. It’s a shame, I would have liked to see the bloodbath. It would have been like watching an eclipse. Let’s hope another time.