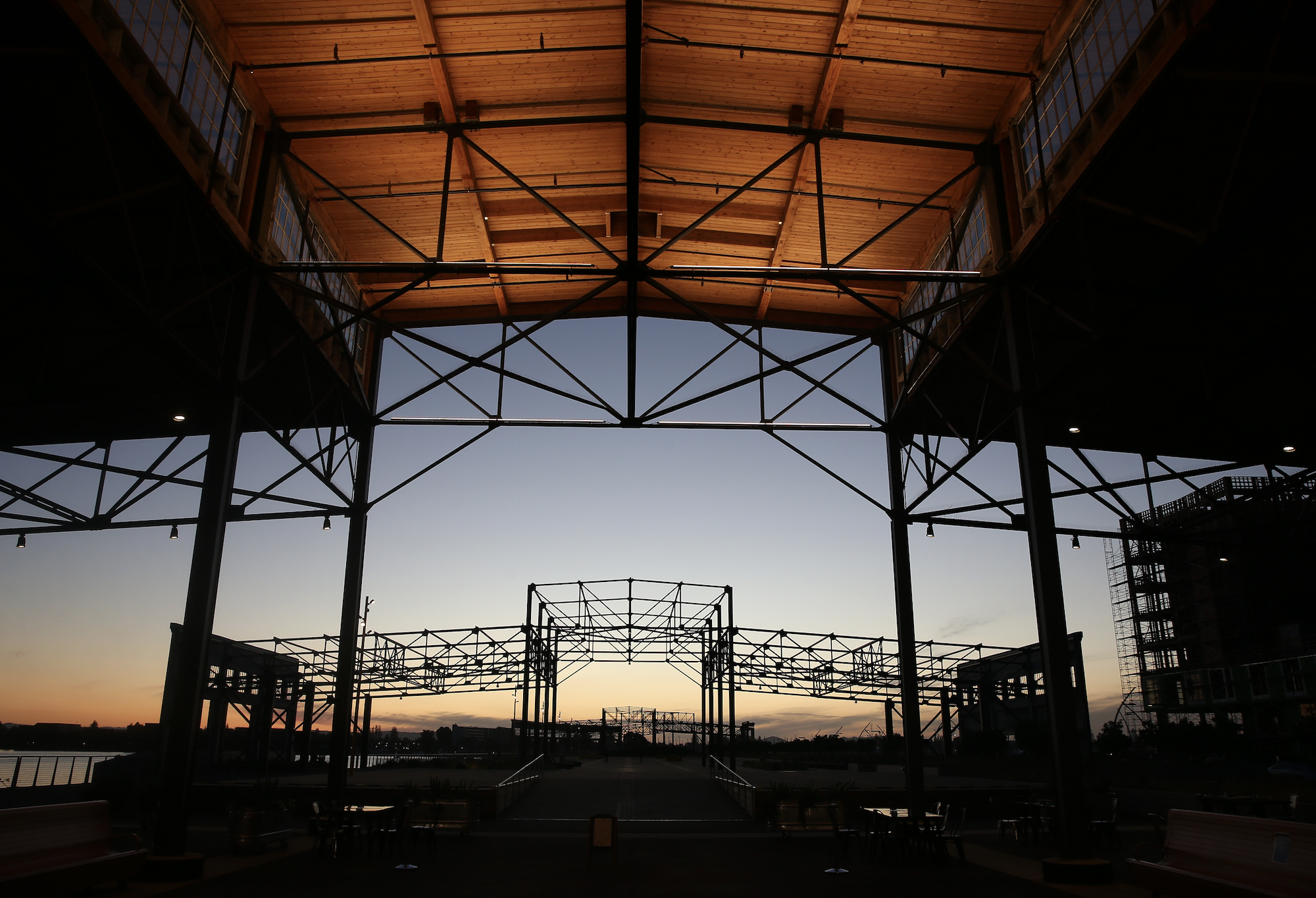 Oakland is bordered by about 19 miles of waterfront, but the city has no reputation for recreation on its bay. Middle Harbor Shoreline Park and Judge John Sutter Regional Shoreline are outliers in an otherwise lackluster shoreline recreation offering.

The root cause of this shortage stems from what put Oakland on the map in the first place: the city’s shoreline is largely reserved for the shipping industry and maritime activity. Loading cranes and warehouses have taken over parks along the Oakland coast.

A dearth of waterfront parks was on the mind when developers decided to build what is known as the Brooklyn Basin. In the area just south of Jack London Square, developers are in the midst of a multi-year project that is repurposing 65 acres of bayside land to build 3,100 new homes, including 465 earmarked for affordable housing.

Amid this real estate boom, they also developed a waterfront park that draws people of all styles to the Oakland shoreline.

Every weekend at Township Commons, there are several events for outdoor dancing, roller-skating, or just having a picnic overlooking the San Francisco Bay from Oakland’s vantage point.

The plan is to develop a total of five waterfront parks – half of the development’s 65 acres are set aside for parks that will line the length of Oakland’s estuary like a necklace – but it took a joint effort ago years to bring this renewal to the waterfront.

A 2005 article in SFGATE detailed the struggle for “the soul of Oakland’s waterfront” while plans were in their initial development. The Brooklyn Basin project is led by Oakland’s Signature Development Group and Chinese investor Zarsion Holdings Group.

The Zarsion Holdings group invested $1.5 billion in the development, and when the deal was announced in 2013, the then government. Jerry Brown was in Beijing on a trade mission. Brown and former Oakland Mayor Jean Quan are credited with spearheading the development of the Brooklyn Basin.

Jim Ratliff, who at the time served on a city advisory committee overseeing waterfront improvements, opined that the Brooklyn Basin project needed a park as its centerpiece. “Oakland is a waterfront city, but nobody knows that,” he said.

The struggle during the project phase is paying off today with the dynamic and unexpected Township Commons that has become the beating heart of the Brooklyn Basin.

Located just off the 880 and the Embarcadero, in the shadow of ever-growing apartment complexes, the waterfront park is a local spot with mass regional appeal. The park debuted towards the end of 2020.

On a recent Sunday afternoon, the park was alive with a flurry of community dances and parties, each of which has sprouted on its own over the past two years.

At the end of each weekend, Salsa Bachata Sunday takes over the central promenade, where dozens of revelers sway their hips and tilt their heads back to Luis Enrique’s insatiable salsa hit “Yo No Sé Mañana.”

Where the land meets the bay at the edge of the park, a lively drag show on roller skates was underway in an open-air venue with the backdrop of Alameda and Coast Guard Island.

The artists were dressed in vibrant outfits and twirled around a makeshift ice rink. A Shania Twain song was covered as a table of judges nodded to the acts. There were pasted paper messages with Venmo QR codes to send a suggested $7 donation to event host Rollin’ with the Homos, which hosts the show every fourth Sunday of the month.

Nick Nieto, project manager for Signature Development Group, told SFGATE that these events were unplanned but are welcome.

“The beauty of space is how many events were organic,” he said. “Rollin’ With the Homos approached our property management folks and we said, ‘Go ahead, that’s awesome! “”

Inside the 9th Avenue terminal are businesses such as Rocky’s Market and the California Canoe & Kayak sports store. Rocky’s hosts events ranging from comedy to flamenco. On Sundays there is a series of live music which differs each week; just last month there was Afro-Caribbean rock music and gospel.

Rocky’s outdoor events have provided live entertainment during the social distancing era of the pandemic, but their activity is not expected to last beyond the summer.

Speaking to the East Bay Times this week, Rocky’s chef Corinne Kinczel explained that there isn’t enough business to stay open, and Rocky’s will be closing its location in the Brooklyn Basin on the 31st. august. There’s a grand finale for Melissa Cruz’s flamenco show at Rocky’s scheduled for August 26.

“The Brooklyn Basin team plans to seek a new tenant for the space after Rocky’s closes in late August,” Nieto said. “It’s still early in the construction of the Brooklyn Basin, and the neighborhood will continue to grow and evolve over the next few years as new public parks, retail opportunities and residential communities come online. .”

As commerce faces a headwind in Township Commons, people will continue to visit and savor the park which has been uniquely designed to reflect the town’s past.

Landscape architects EinwillerKuehl of Oakland were keen to design the park as a tribute to its maritime roots. The land was historically used to house a long, massive shipping warehouse that dates back to the 1930s. It once thrived for general cargo (when goods were placed in individually counted units), but the warehouse did facing gradual decline as Oakland and Alameda grew.

Nieto explained that the death knell for the site came when container shipping became the norm and the creation of the Posey and Webster Street undersea tubes prevented larger ships from passing through to reach the docks.

Today, there are numbers painted on the boardwalk that correspond to where the individual loading docks once stood.

The steel skeletons of old warehouse structures remain throughout the Township Commons to create a palpable sense of the past that meets the present. Similar to the ongoing development of the Brooklyn Basin and the continuous flow of Oakland, Township Commons fluctuates over time.