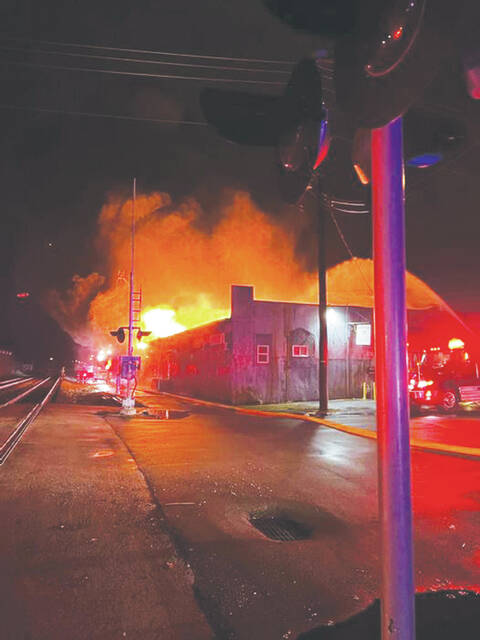 For many Maysville residents, it held fond memories of their childhood and teenage years, of skating parties and the ritual of dating as adults.

The Maysville Roller Rink has entertained generations of children from across the region, but a fire that broke out just before midnight on Thursday, February 17, put an end to that ride.

“All residents of Maysville and Mason County have found memories of the downtown ice rink as it has entertained families for generations here locally. It seems like everyone has a story of growing up, going to school, having a birthday party or having a party there since they were young,” said Mason County Executive Judge Owen McNeill.

The Lexington Street facility was nearly flattened by the blaze, which was fanned by high winds, according to Maysville Fire Chief Kevin Doyle.

Maysville firefighters were dispatched to the scene around 11:30 p.m. after receiving reports of smoke coming from the building, Doyle said. During a visit, a fire in the rear wall of the wooden structure was discovered, he said.

Firefighters then began tackling the blaze which was fueled not only by the wind but also by the vast empty spaces inside the rink, he said, meaning no walls was going to slow the fire.

“The wind was pretty strong,” the fire chief said. “It (the fire) spread quite quickly.”

The biggest challenge firefighters faced was containing the fire in the rink and preventing it from spreading to nearby buildings, Doyle said. They succeeded in doing so, he said. No other buildings were damaged and no one was injured, Doyle said.

“I cannot say enough about the fire, local law enforcement and other emergency personnel who responded, not only to the fire but throughout the night, following the storm,” McNeill said. “These men and women in our community come out when called, regardless of the conditions. By the time I arrived the flames had just started to appear through the roof. The fact that no other structures were damaged highlights the professionalism and determination of our fire department and emergency response personnel.

By 2 a.m. the blaze was under control, but firefighters remained on the scene overnight and into Friday morning as hot spots developed and the fire continued to burn beneath the rink floor which had been covered over the original floor, Doyle said. Heavy equipment was brought in to remove the skating surface, he said.

The rink was currently owned by the Davenport family. After a difficult night watching their business burn, a family member said he would prefer not to comment on Friday.

The rink began operating in 1954, according to information on its Facebook page. It was currently open to the public on weekends and was also available for private parties. Doyle said he could not find any information about the building’s age or original purpose.

Local officials lamented the loss of the iconic venue.

“This is a great loss for our community, but especially for the Davenport family,” said Maysville Mayor Deborah Cotterill.

“The fact that we can each think of these memories and smile underscores the impact this business has had on generations of young people in Maysville and Mason County,” McNeill said.

“My thoughts are also with the Davenport family, not only the owners of the establishment, but Megan Davenport is part of our Fiscal Court family, working in the Treasurer’s Office. I am confident that our community will rally behind their family and help them through the difficult days ahead,” said McNeill.

Although there have been reports of wires being blown down and sparks seen coming from those wires, Doyle said a cause for the fire has not been determined.

In addition to the MFD, the Washington and Lewisburg Fire Departments also provided assistance at the scene, as did Maysville Police, Doyle said.