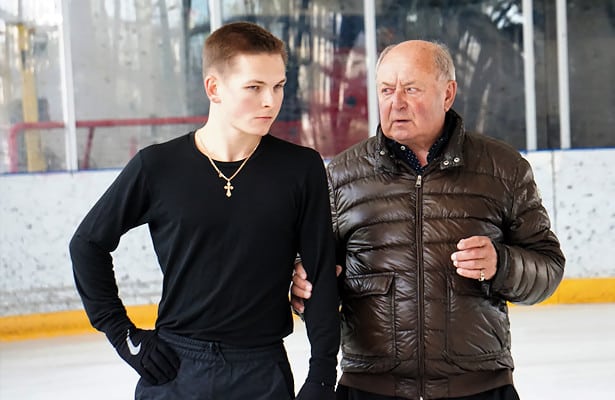 It’s full steam ahead for Russian champion Mikhail Kolyada training alongside 2021 world silver medalist Lisa Tuktamysheva, 2019 European champion Sofia Samodurova and others under the guidance of the coach. Alexei Mishin. Skaters jump left and right, perform quads and triple axels, work on their rotations and step sequences, and constantly receive feedback from coaches. Mishin, who has been training at the Yubileyny Sports Palace for decades, just turned 80 in March. He and his co-coaches, Tatiana Mishina and Tatiana Prokofieva, are on the ice every day with their students.

Athletes not only work on elements, but also polish their new programs. When Kolyada turns on his new short program music, Tchaikovsky’s music Nutcracker fills the rink and the ice skater becomes a dancer, performing every accent of this sweet but strong melody.

“I love this music,” said the 26-year-old after training on a hot July day. “I can’t say that I particularly liked classical songs lately, but this music gives me goosebumps. Obviously I saw the ballet, but I’m going to have to see it again.

Kolyada describes himself as a music addict and listens to all kinds of music.

“As for my preferences, there must first be music, the text is already secondary. I listen to the instruments and if I like it I add it to my playlist, “he explained.” Here (for the Short Program) it’s the same. I really like the way the orchestra plays, violin, drums… this piece goes up powerfully at the end and it’s awesome.

The three-time champion of Russia suggested Nutcracker to his coaches after the idea suddenly popped up. “I said straight away that’s it! said Kolyada. “We had been looking for music for a long time, listening to a lot of different options, but nothing really appealed to me. But this room did. He then suggested it to his coaches Prokofieva and Mishin, who gladly accepted the choice. Choreographer Ilia Averbukh came to St. Petersburg in May to build the program.

The long program of Schindler’s list was another story. Coach Alexei Mishin gave this music to the skater and invited Nikita Mikhailov as a choreographer. “I’m just following the coach’s orders, so to speak,” Kolyada noted. “I do what he ordered. Orders are not negotiable.

The program is an interesting challenge for the 2018 world bronze medalist. “It’s difficult, because I not only have to do the technical part, but also try to convey this tragic story to the public and do it in a way that everyone immediately understands what this program consists of, what this music is about. However, since the theme is well known, I think no one has to guess what it is. For the moment, it is still difficult for me to combine the technical and choreographic part and to present it as I see it. He added that he doesn’t mind that other skaters have been skating or skating for Schindler’s list.

While many fans would have preferred the Russian champion to keep his successful short film “Nureyev” from The white crow, Coach Mishin and Kolyada both wanted to change the schedule.

“I don’t like to skate a program for years, because it gets boring,” said the two-time European bronze medalist. “Skating 1000 times to the same music in practice and then listening to it another year is obviously difficult,” he explained. Coach Mishin added that the program will not look fresh by the end of the season. He also believes that creating a new program always helps a skater develop.

While Kolyada had worked with Averbukh, who choreographed the “White Crow”, it was his first experience with choreographer Mikhailov.

“I’ve known Nikita for a long time, probably since 2003 or 2004,” explained the 2018 Olympic team silver medalist. “I’ve always liked the way he skates. He has very good skating skills and a solid presentation. He built the program, I repeated it. However, I have my own vision of one of the choreographic movements and I do it my way.

Preparations for the Olympic season are well underway. Kolyada participated in two high altitude training camps in Kislovodsk in the Caucasus Mountains and in Courchevel in France.

“The camps were very successful,” observed the athlete. “Kislovodsk is at 1240 meters and Courchevel at 1850 meters above sea level. When we returned to Piter (St. Petersburg), we started with new energy. It’s harder to train in the mountains, so it gets a little easier when you get home.

The 2021-22 figure skating season is fast approaching, but Kolyada remains focused and calm.

“I’m approaching it in an absolutely normal and maybe even calmer way than in previous years,” he said. “I just need to work. I’m just an interpreter, he (the coach) looks for everything and obviously that makes it easier for me to work.

The athlete feels in good hands with a coach who has over 50 years of experience and helped him come back strong last season after missing the entire 2019-20 season due to health issues. Indeed, the talented skater has shown much more consistency in his performances since his stint at Mishin last June. Kolyada regained his national title and won four other individual competitions as well as the world team trophy with the Russian team. He finished in a respectable fifth place at the 2021 ISU World Championships and, along with Semenenko, secured the chance for a third Olympic quota place.

The 2020 Rostelecom Cup champion, who has been selected for ISU Grand Prix events in China and Russia, also plans to compete in Challenger events this fall. In the meantime, he looks forward to the Grand Prix.

“These are great competitions, there aren’t that many competitors, but they’re all very strong,” he said. “It’s another chance to compete and work.” But he doesn’t trivialize small events. “There are no unimportant competitions,” Kolyada said. “Right, there is a little more attention at the Grand Prix on the part of the media and regarding physical and mental preparation.”

Off the ice, the three-time Russian champion enjoys spending time with his wife, Daria, who is a former competitive pairs skater. The young couple got married two years ago. Sometimes when in town people recognize Kolyada and ask for a photo or autograph. He says he doesn’t mind.

“It’s good, because it’s like giving gifts,” he said. “I really like giving gifts. It is the action itself that arouses certain emotions. Of course, it’s nice to be recognized and to be able to put people in a good mood, ”he concluded with a smile.

Altwegg, figure skating gold medalist in Oslo 1952, died at the age of 90