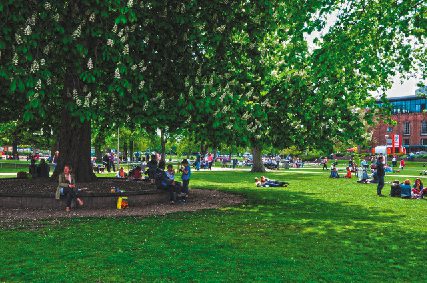 MINI golf and an ice rink could be included among the new attractions at Stratford’s Bancroft Gardens, recreation grounds and waterfront.

Stratford District Council plans to explore proposals for new and seasonal attractions at its Cabinet meeting on Monday, July 5.

Although the discussion coincides with the need to review and renew licensing and leases, the council aims to attract more tourists and increase the city’s income.

So far, plans involve a potential golf course located on the recreation ground, which would be open year round subject to terrain conditions. The council would seek offers from companies on condition that they reflect the environment and heritage of the place. Plans also include a refreshment kiosk and activities such as giant chess sets.

Also under discussion, a seasonal ice rink, which would be installed from November to the end of January on Waterside, with a “slight” possibility that it will materialize this winter. Both attractions are said to be licensed to sell alcohol.

Reference was also made to a possible cinema as well as an increase in vendors and an “activity” for children under 14.

District Councilor Lan Shenton said, “I am overwhelmingly in favor of this as we need to refresh our offering and make our assets work harder for us. The indicative income may or may not be achieved and investing in golf can be a problem but we will never know unless we try.

“I also really like the rink and movie ideas because I know the operators would be interested in bidding for the rink. Without a doubt, not everyone will like it, but we need to make the best use of what we have and deliver what people – residents and tourists – want as long as it’s done in style.

The ice in the pond is thick enough to skate again in the Mackenzie Basin, finally