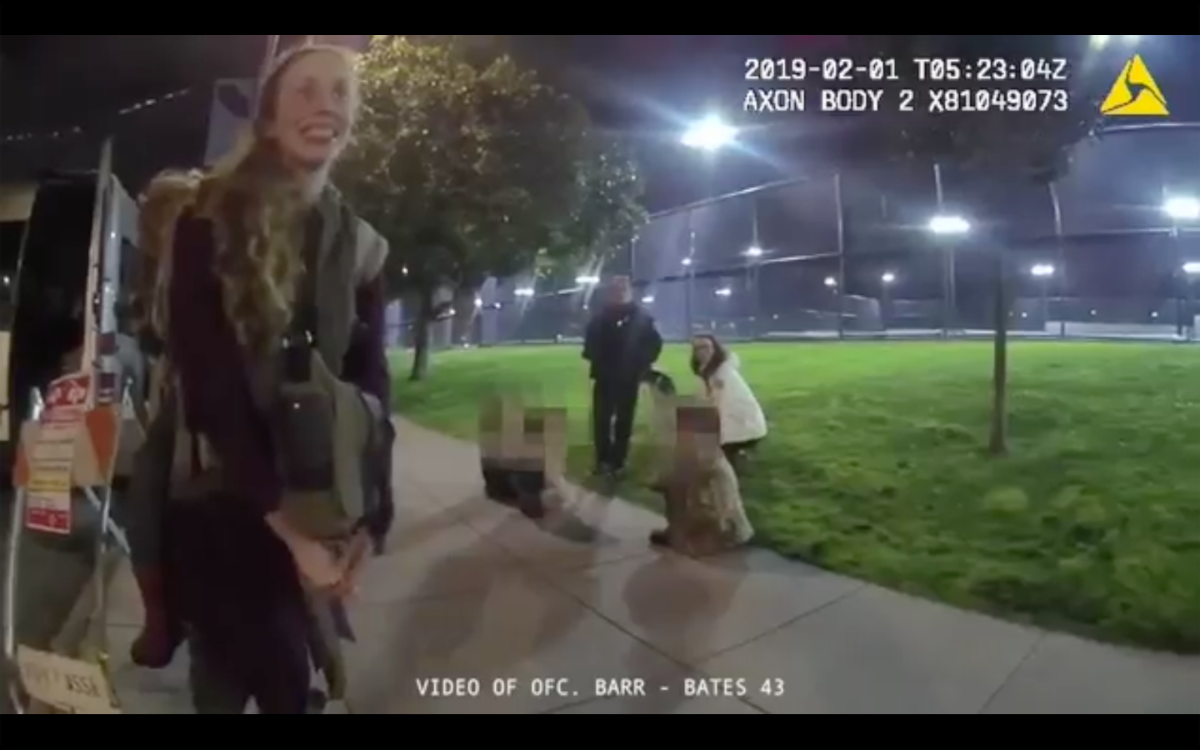 More than two years after a swarm of SFPD officers arrested a Mendocino couple in Dolores Park and sent their five young children to child welfare services, recently released body camera footage tells a different story of what happened in Dolores Park as the police account.

The video was filed in federal court for the Northern District of California this week, just weeks before a July 19 hearing in the lawsuit brought by married couple Kirstin Johnson and Sam Martisius. The city attorney is seeking summary judgment on behalf of the six bureaus involved, arguing that they had probable cause for the arrests. The family is suing the officers over various claims, including illegal searches and seizures, emotional distress, and false arrests and imprisonment. They are claiming over $ 25,000 in damages.

Meanwhile, police body camera footage from the â€œvacation gone badly wrongâ€ shows a cooperative mother briefly ceasing to comply with officers when her husband is arrested and her children are taken away.

You may remember the strange story: In January 2019, Johnson and Martisius, their children and their dog Gandhi came to town from their northern farm hoping to relocate the dog, who was aggressive towards their animals. farm. They went ice skating and shopping, then in Dolores Park Johnson and her kids found someone who was interested in Gandhi. While they were sitting in the grass, Martisius, an emergency doctor, played basketball on a nearby court.

Suddenly, they were surrounded by the police. The parents were arrested on five counts of willfully endangering children, resisting arrest and public intoxication, and the children, including a 10-month-old baby, were taken to the Mendocino CPS . The dog, meanwhile, was sent to the pound.

Body camera footage begins with the arrival of two officers questioning Johnson about his drinking. They tell him that they received information that Martisius was intoxicated.

They tell Johnson she smells of alcohol and Johnson admits having had a drink earlier in the day. No breathalyzer is administered.

As she tells agents that her husband, Martisius, has been drinking, camera footage shows Johnson is consistent and cooperative with the agents, answering questions about the reason for his presence and providing identification. However, as more and more officers arrive, take his children out of sight and continue to ask questions about his drinking, Johnson becomes anxious.

“It’s not that I don’t know it,” Johnson says in the video, still carrying a child in a harness on his back. “I don’t really feelâ€¦ that I should answer any of your questions, because I don’t feel like you are looking at me with loving eyes.” She asks out loud why her family has never been to town.

Moments later, the officers charge towards the nearby basketball court and Martisius. Body camera footage obtained by Mission Local focuses primarily on Johnson, but the family’s lawsuit alleges Martisius went to pick up his 10-month-old baby and an officer pushed him to the ground, resulting in a concussion.

The motion from the city attorney’s office, however, indicates that Martisius was sitting with his baby when officers approached and refused to stand up or cooperate with officers.

The officer accused of pushing Martisius is Sgt. Flint Paul, who was also filmed bumping into a skateboarder in 2017 as the skater bombarded Dolores Street. This incident resulted in serious injuries for Anthony Economus, but Paul escaped the discipline of the SFPD.

Footage shows Johnson watching in disbelief as officers arrest Martisius and take the baby. Subsequently, body camera footage of another officer shows him joking that he doesn’t know how to hold a baby and pass it on to others, including a civilian bystander. From the sidewalk, Johnson begs to hold and nurse her child.

According to John CotÃ©, spokesperson for the city attorney’s office, the recent petition filed by the city “sets out all the reasons why this case should be closed, that the agents had absolutely a probable reason to arrest these individuals, they were publicly intoxicated, they put their children in danger. Several people had called 911 to report them because they were concerned about the children.

In another body camera segment, an officer walks to nearby Woods CervecerÃ­a, where the family had stopped earlier for a pizza. The man behind the counter expressed concern over the father’s intoxication, but noted that he was not worried once he saw Johnson, mentioning that she appeared “balanced”.

And, for much of the incident being filmed, the officers seem to agree – they don’t remove the child from Johnson’s back for several minutes and it doesn’t appear that she is being arrested.

That is, until she walks to the back of her van to get some coconut water. The officers don’t stop her, but as she begins to question the legality of the officers’ actions, they quickly decide this is the last straw: Sgt. Paul confiscates the coconut water and he and another officer handcuff Johnson.

While then prosecutor George GascÃ³n did not pursue the charges against Johnson and Martisius, the couple said the separation was a traumatic experience for their family.

According to their lawyer, Ben Rosenfeld, the family was reunited within 28 hours – but only because they could afford $ 40,000 to get out of jail, get their family van out of the impound and immediately head north. The parents’ bond was set at $ 250,000 each, but Rosenfeld said, â€œThe surety company looked into this case and she thought it was so outrageous that she willingly offered to take less. [the standard] 10 percent.”

â€œI certainly believe in some degree of intervention on behalf of children for their protection and safety,â€ Rosenfeld said. “But I mean, it’s right through the looking glass, and the police have inflicted the very terror they claim to be trying to prevent.”

As for the dog, Gandhi, the family returned to town and paid to get him back from Animal Control, and were eventually able to relocate him to Mendocino.