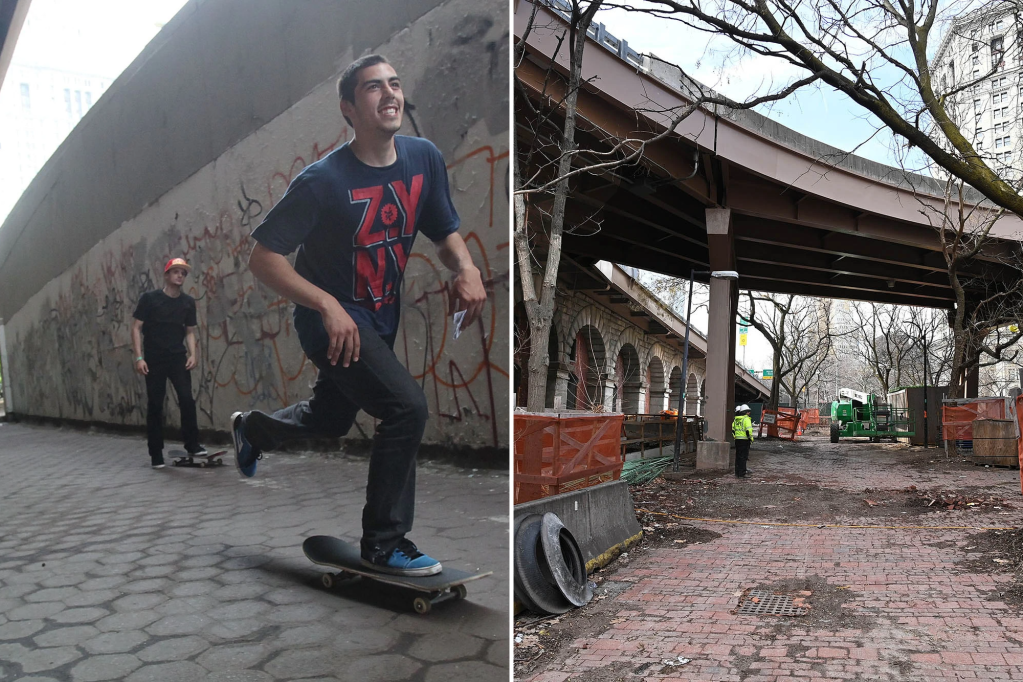 New Yorkers and Skateboarders Want the Brooklyn Banks Back

They can’t take it to the banks.

Manhattanites, skateboarders and a nonprofit are fed up with the icy pace of repairs to the Brooklyn Bridge, which fenced off nine acres of space for more than a decade, including a famed skate spot world and a public basketball court.

“I don’t think the city realizes how vital this place is,” said Joe Ramone, 36, who runs the Save the Brooklyn Banks Instagram account. “It’s more than just a ‘Skate Spot’. It was a home for so many people.

The Brooklyn Banks is a legendary skating mecca that rose to popularity in the 1980s and was home to big-name skaters like Harold Hunter and Eric Koston. The site was recreated in the 2003 video game “Tony Hawk’s Underground”.

Residents of Seaport and Two Bridges who have never heard of Tony Hawk also want the Banks back.

“There’s a lot for young children here,” said 78-year-old Nadia Vogel. “We have two playgrounds in the neighborhood, but the older kids don’t have much.”

Cara Galowitz, 57, called it “dead space” in its current state.

Andrew Goldfarb, 68, said he would like to see some of the space used for food, music and art. “Things that bring people together,” he said.

“I just don’t want to see it replaced by touristy stuff,” said Guy Ursitti, 46, who has lived in the neighborhood all his life. “It has to be for the locals.

Since 2010, the Brooklyn Banks have been closed for a series of DOT projects. It was first for painting. Now crews are repairing the stone arches near the bridge access ramps. Many iconic and smooth bricks have been ripped out.

“At this point we are being held hostage by the DOT,” Aixa Torres of the Smith Houses said at the Manhattan Community Board 3 meeting on Thursday.

Still in its research phase, the nonprofit, Brooklyn Bridge Manhattan, is seeking public and private contributions, support, and funding to bring back the skate spot and potentially convert other areas under the Park Avenue Bridge. at FDR Drive in small parks, a library, playgrounds and weekend markets.

“Today is an opportunity to do it before it slips away from us and 50 years later we still see the same damn parking lot,” group founder Rosa Chang said at the meeting. .

DOT spokesman Vin Barone said the current repairs are critical. “DOT is aware of community requests to restore certain areas and is currently exploring concepts that may be possible once construction is complete in 2024,” he said.