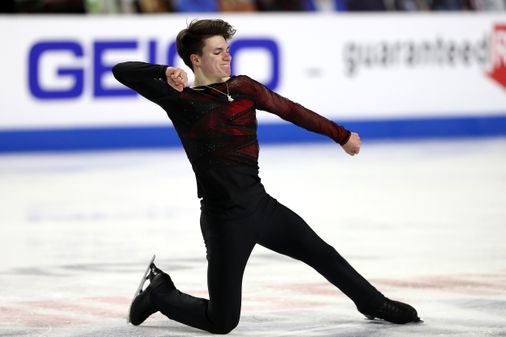 Naumov finished fifth at the January US Championships in Las Vegas. He won summer club competitions in Boxborough and Milwaukee. Then, at the August Cranberry Cup, an international early-season competition held at his Boston Skating Club rink, he finished third with one of the highest overall scores of his career, a 223.15.

Naumov will play on his home rink again this week for the US International Figure Skating Classic, of which he is considered one of the favorites.

â€œI feel good and I feel confident,â€ Naumov said. â€œI basically have chances after chances this season. I have one competition per month until the nationals. I’m very excited to have so many opportunities, especially after last season.

The driving force behind Naumov’s recent success has been the addition of a quadruple jump to his short and long programs. He used to run a clean routine and maximize his scoring potential but didn’t finish very well because he lacked the quad the others were getting.

Over the summer he added a Salchow quad to his short and long programs, and with them he can achieve an internationally competitive score.

â€œFor a long time I skated well but didn’t have a quad,â€ said Naumov. â€œI got the full value from my programs, but without a quad. It was the only step I was missing. I landed this Salchow quad and it was a game changer for me.

Naumov, who is coached by his parents, 1994 World Pairs Champions Evgenia Shishkova and Vadim Naumov, is not only a jumper but also has programs that achieve strong component scores. He kept his two programs for the 2020-21 season, including his unique short program â€œRunâ€, choreographed by Adam Blake, which brings contemporary dance to the ice.

â€œIt’s really, really cool to portray a different vibe and a different side of myself,â€ Naumov said. “I am grateful for Adam’s work.”

Naumov’s rise this year has earned him several international assignments in addition to this weekend’s competition. In October, he will participate in the Finlandia Trophy in Finland, then return to his parents’ homeland, Russia, for his first Grand Prix on foreign soil, the Rostelecom Cup in November. He does not have an Olympic position as a goal for this season, nor a place in any of the major competitions for that matter.

â€œOur biggest goal is not to position ourselves a certain way, but to do my best,â€ Naumov said. â€œI want the quads to be consistent and I hope to put two in my long and maybe two in my short. We are moving step by step. I am only responsible for the things I can do.

This is the first time that the US International Classic has been held in Norwood, the second time in a month that the year-old facility will host an international event.

In the men’s, which starts on Thursday night, Naumov will face his training teammate Jimmy Ma, who finished second in the Cranberry Cup. Ma, originally from New Jersey, has an abundance of skill and style, but consistency has plagued him in the past.

The highlight will be the women’s event, where Russian Alexandra Trusova has to compete. At a national competition in Russia last weekend, she landed five quadruple jumps in her free skate – something unimaginable for a woman until recently.

Trusova finished third at the 2021 World Championships and is part of Russia’s full list of revolutionary skaters. Gabriella Izzo, from Brighton, will represent the United States, along with Paige Rydberg, Sierra Venetta and Maxine Marie Bautista. Defending US champion Bradie Tennell has stepped down.

In ice dancing, this will be the first outing this season for three-time United States champions and world silver medalists Madison Hubbell and Zach Donohue. The Montreal-trained couple will kick off their long-awaited rhythm dance Janet Jackson on Friday afternoon and show off their signature lyrical style in their free dance â€œDrowningâ€. They are clear favorites to win.

Russians Diana Davis and Gleb Smolkin, who train in Michigan, are the international couple to watch on the pitch. Davis is the daughter of the current mastermind of Russia’s coaches, Eteri Tutberidze, who will coach Trusova at the event. This will be one of Davis and Smolkin’s first senior level internationals, and they hope that a good result at Norwood will strengthen among the Russian ice dance elite.