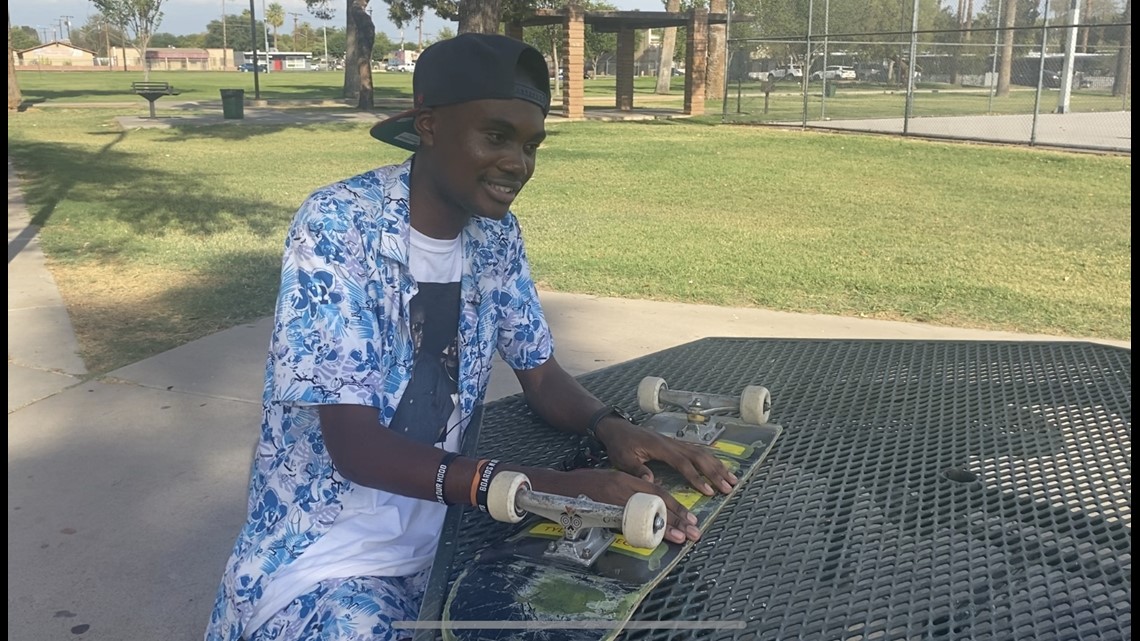 Jessy Mendes is participating in a scholarship in hopes of building a better life for young people in her home country through her love of skateboarding.

PHOENIX — Skating around Perry Park in Phoenix, it’s clear Jessy Mendes is at home on a skateboard.

“I love it,” Mendes said with a big smile on his face.

He takes the rails with ease and flips his board around like it’s practically an extension of himself.

Mendes had been skating for 15 years when his sister bought him his first skateboard.

“Since she bought me this in 2003 until today, I’ve been a skateboarder,” he said.

But even after all those hours on his board, Mendes still isn’t bothered by falls. In fact, he usually laughs and smiles through them.

“I get up and try again because what I’m doing makes you try again and keep going,” Mendes said.

Mendes was born in Angola, a country in central Africa. But the civil war led her parents to move the family to South Africa.

Mendes stayed there until 2015, when he had to return to Angola.

“Due to economic problems in Angola, my father was unable to continue paying my living expenses in South Africa,” Mendes said. “I had to drop out of school (in) 10th grade. After dropping out of school, all I had was a skateboard.”

The constant was his love for skateboarding, but in his country there was still something missing.

“There are no safe facilities for young people to skate,” Mendes said. “That’s when I decided to start Angola Skateboarding Union. Basically a platform that gives Angolan skateboarders a voice, support, you know, love to grow the sport.”

Mendes worked to make plans, secure land and construction is complete on the first skate park in Angola. But the place has become something much more.

“A place they call home, a safe space outside of society where they can just come in, be united and do what they love, which is skateboarding,” Mendes said.

“It means a lot to me because I started this project from the beginning with my father, and in 2020 he passed away,” Mendes said. “The last image I have of him is building this project.”

Mendes continues to channel his passion into helping foster children there as well. Help them find an outlet and improve through skateboarding.

“These are kids who don’t live in houses with moms and dads, they’re kids who live on the streets,” Mendes said.

All of this work earned Mendes the Mandela Washington Fellowship for Young African Leaders.

He’s been at Arizona State University since early June to learn and network to bring his experience back to Angola, grow the sport and build more skate parks.

Mendes will soon travel to San Francisco to learn and partner with the nonprofit Hip Hop for Change, which empowers young people. Hoping to put the art of the kids there on skateboards for the kids he works with as part of the Angola Skateboarding Union and bring them back.

Mendes is looking for sponsors to help him bring more skateboards, skate parks and a skate shop to Angola as well.

Mendes believes it is young people who can create change.

It’s a passion that Mendes clearly has and wants to share with the world.

“If you love something and you’re really passionate about it, you shouldn’t let anyone tell you, you can’t do it. But instead, you should find ways to do it yourself,” Mendes said.

Keep up to date with the latest news and stories on the 12 News YouTube channel. Subscribe today.

Curious Photographer: Thoughts on the ideal location for a new swimming pool in Norwood/Bedford Park