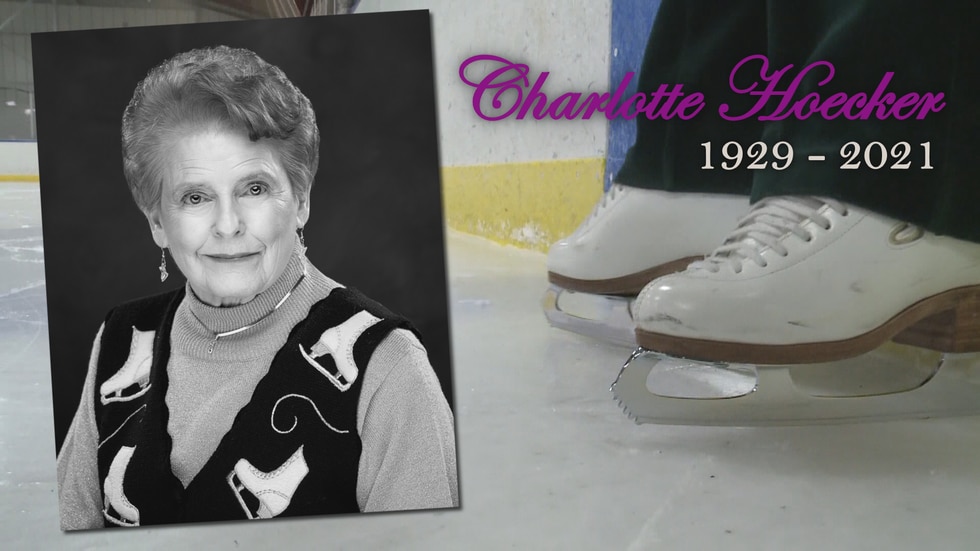 Remembering Charlotte Hoecker and her legacy of living fully in Wausau

WAUSAU, Wisconsin (WSAW) – On Saturday, people will take the time to honor a Wausau treasure. About two weeks ago, Charlotte Hoecker passed away at the age of 92. She has been involved in three choirs, many volunteer opportunities like mobile meals, but is best known for her love of teaching ice skating.

Charlotte has designed her life around her favorite activity. Her father taught her to skate on Arrington Lagoon in Evanston, Ill. When she was 4 years old and she was hooked.

â€œMy sister and brother liked it, but I loved it,â€ Hoecker told NewsChannel 7 in a 2016 interview celebrating his 70 years of teaching skating.

She and her husband lived in several states, the hottest being Dallas, Texas. Five years in Texas was long enough for Hoecker as there were no indoor rinks available there. They had to move to a colder climate to be able to continue skating. They had four children, two boys and two girls, when they settled in Crystal Lake, Illinois.

â€œThey bought a house in Crystal Lake with a pretty big lot and they built their own ice rink for almost 10 years,â€ said Marian Hoecker-Hahn, Charlotte’s third child, â€œand that’s where mum got it. gave skating lessons. “

She also made sure that each of her children also learned to skate.

“I was old when I started skating … I was 6 or 7 years old,” said Henry Tilden-Hoecker, Charlotte’s eldest son. It looks really old when her younger sister, Sarah Hoecker, says, â€œI was 26 months old when she put me on skates.

The philosophy Charlotte has adopted throughout her life is that no one is ever too young or too old to skate.

â€œIf you can walk, you can skate. So there is no excuse, â€she exclaimed in a 2013 interview with NewsChannel 7.

Hoecker moved to Wausau in 1979 for the convenience of her husband’s work and because of the many recreational opportunities in the community, especially the ice rink.

Machek called Charlotte his trainer. The two met about nine years ago, shortly after Machek moved to Wausau. She saw the ad for “Skating with Charlotte” and gave it a try. It was the first time Machek had learned Charlotte’s attention to detail.

â€œWe came out of the rink and she said, ‘How long have you had these skates? And I’ve said, well, since I was 15. She said, ‘Well, I think you’ve got all the usefulness you need out of it. We’re going to buy a new pair of skates, â€she laughed.

Charlotte was known to advocate for the purchase of new skates.

â€œIt’s not the ankles, it’s the skates,â€ she said in an interview. She told “Emily 2” aka Emily Davies of NewsChannel 7 who was one of her students the same thing.

“Did she tell you to go to the goal line?” Sarah Hoecker asked.

She did it. It made her children laugh, “it’s Charlotte!”

Her attention to detail, her picky personality, as well as her energy and enthusiasm for serving others have been carried over into all parts of her life. She volunteered for things like mobile meals for 30 years, the Special Olympics where she always encouraged athletes to complete, and she served her church. She has also participated in three choirs: Wausau Pro Musica, Center Stage and Show Choir.

Her kids say she loved music almost as much as she loved skating. Her children say she started teaching skating so that she could earn money to buy a piano, which she had the rest of her life. She sang in Wausau’s first Silver Pageant. Her choirmate who stood by her side for 20 years in Wausau Pro Musica, Liz Corbett, said she never let anything stop her from doing what she wanted to do, like bravely singing a solo for the song “Blessing”.

â€œHe was really someone who was involved in the community and I think our community is a richer place because of his life here,â€ Machek concluded.

His intense involvement and his joie de vivre will also be felt.

â€œOne of the songs we’ve sung over the years, ‘Sing Me to Heaven,’ and I think we’ll think of Charlotte in Heaven, singing,â€ Corbett said.

â€œI’ve never really spent a lot of time here without her on the ice with me or on the side watching and I don’t know,â€ Machek paused. “It’ll be hard.”

However, the lessons learned from this 5-foot-1â€¦ â€œRemember the half,â€ added stepdaughter Marsha Hogg-Hoeckerâ€¦ tall and courageous will continue her legacy.

â€œFind a passion. Find joy. Find a pair of skeleton earrings and wear them proudly, â€noted Marian Hoecker-Hahn with her siblings.

â€œKeep your knees bent and always be flexible,â€ Machek explained as not just a skating, but a philosophy of life. â€œBe flexible. Learn to keep your balance in difficult situations.

â€œYou’re never too old to try something new and when you do, give it your all,â€ Corbett noted.

And stay eternally young in spirit, body and spirit; in his own words, “Part of me never got old.”

A memorial service will be held on Saturday October 2 at St John the Baptist Episcopal Church, 330 McClelland St, Wausau, at 2 p.m. A visit will take place from noon to 1 p.m. The live stream will be available at www.brainardfuneral.com. For those present, wearing a mask is compulsory and the family encourages people to be vaccinated.

In lieu of flowers, donations can be made to Special Olympics of Wisconsin and St. John the Baptist Episcopal Church in Wausau.