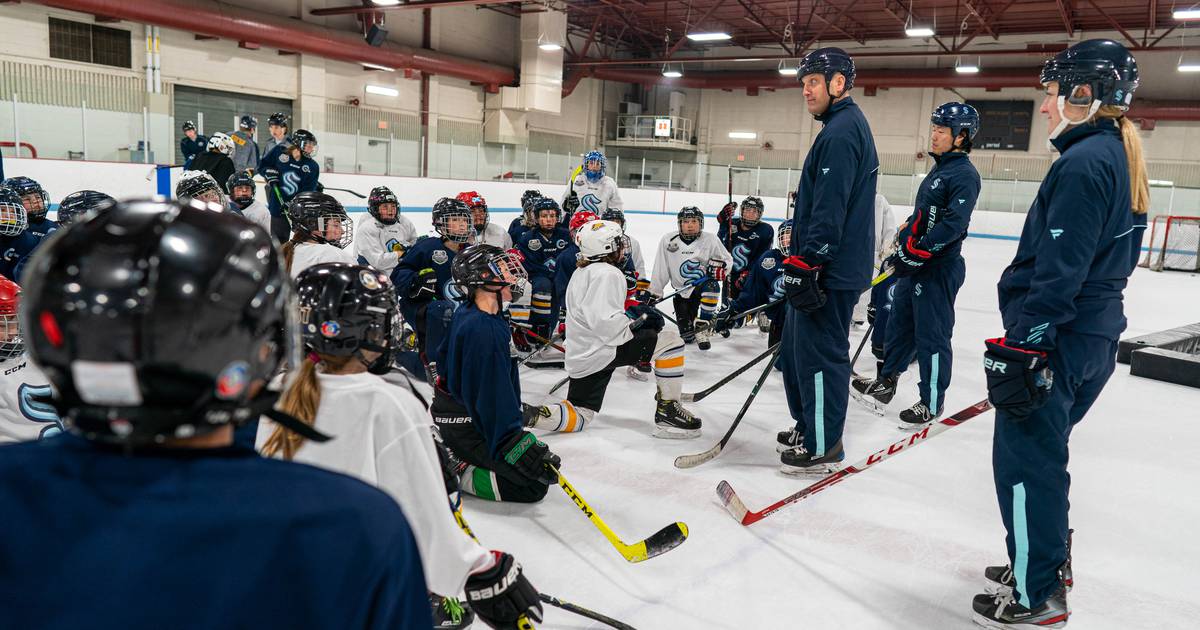 Although hockey is one of the most popular sports in Alaska, it is among the least accessible and least affordable for children. Getting the right gear and finding affordable camps can be a financial burden that many parents cannot afford or have chosen to avoid, opting to enroll their children in other activities.

Last year, the Bristol Bay Native Cooperation entered into a partnership with the NHL’s Seattle Kraken. A year later, the two organizations teamed up to host a week-long training camp for young participants at the Anchorage Youth Hockey Academy. They have also partnered to sponsor 19 children 12 and under who otherwise might not have the means to participate.

“Hockey definitely has a financial barrier,” said Kraken player development coach Katelyn Parker. “Being able to overcome some of these obstacles together to provide space for those who otherwise might not be able to afford to come to camp and they will have the same experience as those who can afford to.”

Last week around 200 children with a mix of boys and girls participated in the first “Kraken Week” and those who were sponsored included nine boys who are either shareholders or descendants of BBNC shareholders and 10 girls sponsored by the Kraken.

“This is not just a camp to practice and learn about the sport of hockey,” said BBNC President and CEO Jason Metrokin. “It’s a camp where kids see and interact with role models, people who focus on healthy lifestyles, and coaches who have great leadership skills.”

The camp lasts six weeks in total and the total cost for unsponsored children is $330 per week.

“We are just so lucky to have amazing partners and Bristol Bay Native Corporation being one of them and allowing us to be involved in the Alaskan hockey community,” Parker said. “We’re thrilled to be here just to spread the brand and spread the passion for Seattle Kraken hockey.”

Eleven-year-old Mason Nevin is one of the sponsored campers and part of the 12U group. He has been playing hockey since he was three years old and said he really enjoyed Kraken week.

“It’s amazing for free,” Nevin said. “It was fun to drill, skate and shoot.”

This is his second hockey camp. He plays center and left wing.

He says his favorite thing about hockey is “scoring goals and celebrating” and that the sport has allowed him to make a lot more friends.

In addition to Parker, the NHL expansion team has sent several members of its team of player development coaches whose duties include structuring practice plans, program and growing the game. focuses on teaching the fundamentals of the game of hockey, such as balance, skating, puck handling, shooting and passing.

David Kyu-Ho Min is a player development coach who grew up in the Seattle area but was born in Seoul, South Korea.

He played junior hockey in the NAHL and the United States Premier Hockey League before becoming a coach and is happy to see more diversity in the sport.

“It was super cool to see the different walks of life,” Kyu-Ho Min said. “When I was growing up, I was the only Korean player in Washington.”

He believes teams and organizations need to be aware and deliberate to grow the game into untapped markets.

“Instead of just saying you’re going to do it, stepping is very important,” Kyu-Ho Min said.

Parker started playing hockey at age four and grew up in Bellingham, Washington, an hour and a half north of Seattle.

She played men’s hockey as a child and in college at Colgate University Division I and coached college hockey for five years. Parker has just completed her first year with the Kraken and is happy to see the participation and inclusion of women at camp.

“Seeing ponytails and long hair is amazing,” Parker said. “Hockey is for everyone and the game is growing. It’s exciting to see the girls’ game grow because eventually we’ll have more Olympians and varsity players.

Since the start of the partnership, Metrokin says there has been an increase in popularity and curiosity about the team and the sport itself among their shareholders.

“A lot of Alaskans are already Seattle Seahawks fans and now we’re seeing a lot of Alaskans, including our shareholders, becoming Kraken fans,” Metrokin said.

Nazem Kadri and Andrew Cogliano return to skating, but not training with full team