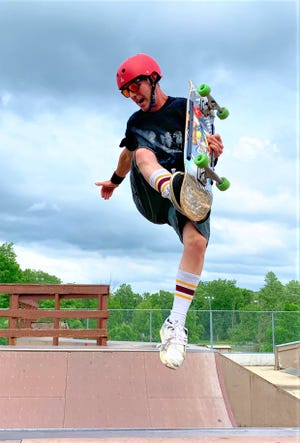 Skateboarder, musician, author making an appearance at the Holmes Library

MILLERSBURG – Using personal experiences to overcome adversity, like losing his mother at 16 and being a rebellious teenager, to find his voice as a professional athlete and author, Wooster’s Doug Brown brings his inspiring message to the Holmes District Public Library at 6 years old. : 30 h Saturday August 28.

Brown will talk about his life, including his experiences as a skateboarder, his time as a musician, and his childhood in Wooster.

“With the addition of the skate park at Deer Run Park next to the library, there is a lot of interest in skateboarding in the community, and with his background as an author and skateboarder, it seemed like a natural program. to house, ”library said director Paula Cicconetti.

Brown started skateboarding in 1986 when he was young in Wooster. He enjoyed roller skating down his sloping driveway and hanging out in the old Wooster Skateland, making sure to ask the girls to skate and meeting kids from other schools. He graduated from Wooster High School in 1992.

He thought he had the job of his dreams, teaching music at Larry’s Music in Wooster, until his professional breakthrough in 2002. It was then that he was signed by his first sponsors at the Gravity Games, a multisport competition featuring a variety of extreme sports like skateboarding. , motocross and inline skates and snowboarding.

For the past 20 years, Brown has traveled the country competing and promoting his brands. But he enjoys sharing his story through his books and speaking engagements, helping children find their place. After a tough 2020, Brown is excited to be back on the road, promoting Yocaher skateboards, roller socks, Triple Eight, Negative One griptape and Better Bearings. He also represents Dreamwakers.

“Being inducted into the Ohio Sports Museum in Columbus is something I’m really proud of because they chose me to be among all of the great athletes in Ohio like boxer Buster Douglas,” he said. “They sent a team to Wooster to buy one of my skateboards. It was something that was pretty big in my life. It opened a lot of doors.

“I love libraries,” Brown continued. “They are one of the great resources of a community. I speak in schools and detention centers, but libraries are fun because as an author I am a literacy fan. in a library makes me happy. “

He has written several books including “Bliss of the Unwind: My Life Beyond the Board”, “Speedy Entry: Advice for the Rebel With a Cause Teenager” and “Looking Glass Self”. Other books are The Skater’s Night Before Christmas “,” Jumpin ‘Pumpkins “and” ABC Skateboard Day “.

Brown delivers messages of hope and optimism to help people of all ages achieve their dreams. His talking points range from bullying, goal setting and staying drug free. It also promotes bicycle and skateboard safety.

Registration is compulsory and places are limited. Anyone interested in participating should call the Central Library at 330-674-5972 to register. The program will allow time for questions and answers with Brown, and he will also sign autographs.

Prior to the program, he will be spending time at the Deer Run Skate Park adjacent to the library. Brown consulted with Spohn Ranch, the company that designed and built the skatepark.