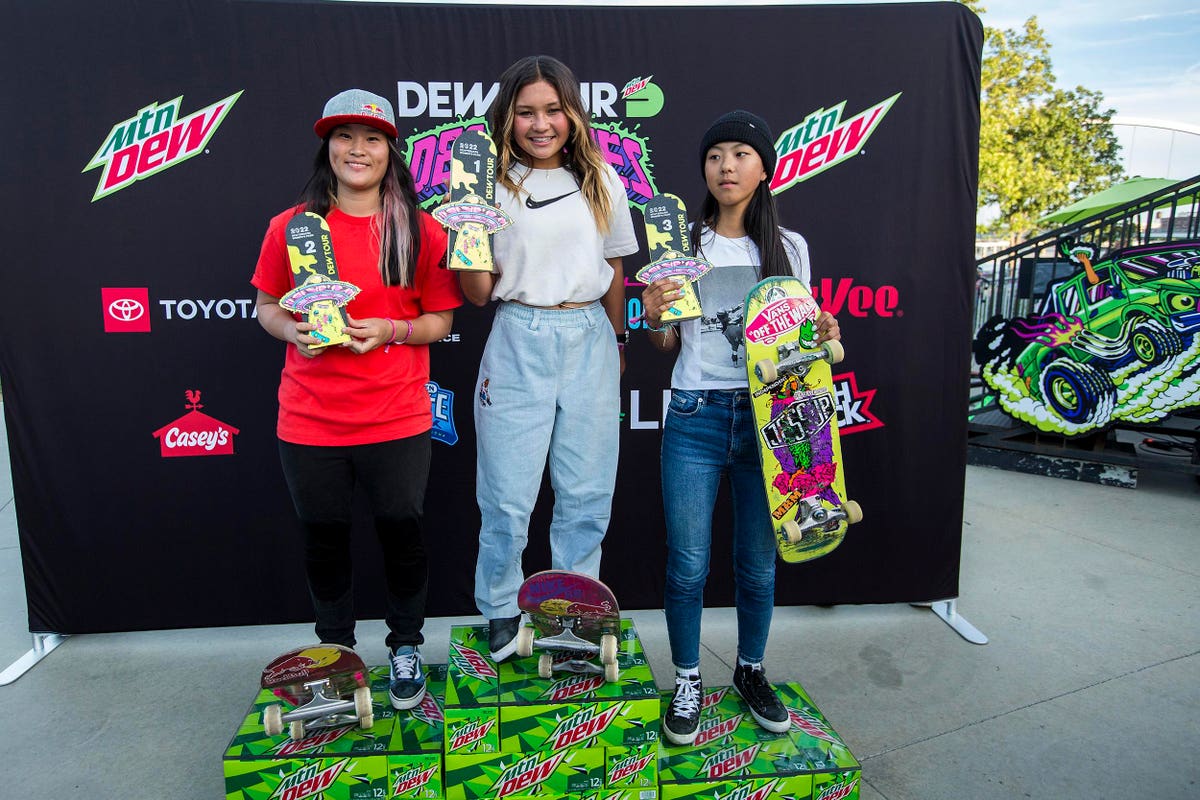 Fresh off of a gold medal at the X Games women’s skatepark, Sky Brown continued to win at the Dew Tour Des Moines, taking the lead in the women’s skate park competition on Friday night.

As at the X Games, Japan’s Sakura Yosozumi and Cocona Hiraki won silver and bronze respectively at the Dew Tour. The trio also made it to the podium at the Tokyo Olympics last summer, with Yosozumi winning gold, Hiraki silver and Brown bronze.

“We all have different tricks, and those are really the best combos,” Brown told me. “The front 3 is one of my favorite tricks. It was definitely a bit harsh, but it was really sick. Once the contest really started, I just knew I was going to drop it.

The contest also included a fastest trick element, which Yosozumi took with his blunt back on the incline wall extension, the most progressive trick in the contest.

“I wouldn’t be here without her,” Brown said of Yosozumi. The duo, by far the top two female park skaters in the world right now, wowed the crowd with their dazzling display of power (Brown), technical ability (Yosozumi) and style (both, in spades ).

“She’s the best friend, and we push each other so much,” Brown, who is British-Japanese but competes for Great Britain internationally, said of Yosozumi. “She is like my sister. Skating with her makes me want to go hard. Thank you, Sakura, for doing this!

Compared to last summer’s Dew Tour, which served as an Olympic qualifier, the mood this year was much more laid back. The contest went straight to the final, with eight women in the peloton.

Prior to the Tokyo Games, it seemed like any woman aiming for Olympic gold would have to include a 540 in her run. Japan’s Misugu Okamoto has been doing them since 2019, Yosozumi landed one for the first time at the Dew Tour last year, and Sky Brown can do them both ways, forwards and backwards.

Brown and Yosozumi included 540s in their runs (though Yosozumi struggled to land his own properly), but this year it was their frontside 360 ​​and backside noseblunt, respectively, that stole the show.

It was a good reminder that while the women’s park court progresses at lightning speed, degrees of rotation are only one piece of the puzzle. Technical ability, style and huge airs will always win favor with the judges.

“I wasn’t that nervous; I was just excited,” Brown said. “I was just looking at the crowd and thinking, ‘I want to put on a good show for them!'”

As for what’s next, Brown will focus his attention on surfing. Last summer, she participated in the inaugural Green Alert event hosted by her mentor on wheels, Tony Hawk. She’s not sure if she’ll be back this year, but one thing is clear: if there’s a women’s park (or vert) contest and Brown is in attendance, she has to be the favorite to win it.