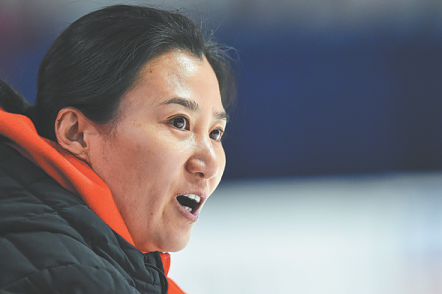 With the glorious home Games now history, China’s national winter sports program ushered in a new Olympic cycle with new faces on and off the ice bolstering its medal ambitions for 2026.

As the country’s most decorated winter sports team, China’s short track speed skating team kicked off preparations for the upcoming Milan and Cortina d’Ampezzo Winter Games in Beijing on Monday, starting with a conditioning boot camp supervised by one of the maestros.

Zhang Jing, a former Chinese skater and former coach of the Hungarian national team, was introduced as the camp’s general consultant, responsible for training planning and performance evaluation. Her appointment increases the likelihood that she will return home to lead the China team after helping to establish Hungary as a global powerhouse in the sport over the past decade.

The coaching staff for the new Olympic cycle is yet to be finalized, however, according to team manager Liu Chenyu, who stressed on Monday that official appointments will be announced in due course.

“The purpose of this training camp is to assess the physical condition of all athletes capable of making the national team for the new season,” Liu said.

“All athletes will be required to complete a variety of training tasks and undergo testing to try to earn as many points as possible in a ranking system for pre-season national team selection,” he said. declared.

Led by two-time Olympic champion Ren Ziwei, a total of 116 athletes from across the country signed up for the 30-day camp, where Zhang’s bespoke training program, which includes everything from stretching to muscle-strengthening work in going through the cardio sessions, is should challenge them to the max.

“It’s about preparing ourselves physically for the start of the season after a long break since the Olympics,” said Ren, who skated the anchor leg of the gold medal-winning Chinese mixed relay team and won the men’s 1000m title at Beijing 2022.

“Off-track physical training is the key to success on the ice. Our pursuit of speed in competition comes from the foundations laid in the summer. I would like to set a good example for the young athletes at the camp,” said Ren, who , as the reigning Olympic champion, could have qualified directly for the team but chose to join the side anyway.

“It also gives me a great opportunity to work on my conditioning weaknesses and further rehabilitate some of my old injuries ahead of the start of the season.”

The 2022-23 short track season opens Oct. 28 with a World Cup meet in Montreal, Canada, the first of six stops in the International Skating Union series.

Guided by a South Korean coaching team led by Kim Sun-tae, Chinese short track skaters won two gold medals, one silver (men’s 1000m) and bronze (women’s 3 000m) at the home Games in February to contribute an impressive 12 gold medals to the country’s 22 since its Winter Olympics debut in 1980 at the Lake Placid Games in New York.

As a member of the Chinese national team at the 1994 Winter Games, Zhang, a native of Jilin, the traditional winter sports province in northeast China, took over the Hungarian national program in 2012 and guided the Central European country to its first Olympic gold medal in short track sprint. skating － men’s 5000m relay － at Pyeongchang 2018 in South Korea.

Under his tutelage, renowned for their combination of rigorous training and light-hearted banter in Dongbeihua, or northeast Chinese dialect, the Hungarian team challenged South Korean and Chinese dominance in the sport. The Hungarian team was led by brothers Sandor Liu Shaolin and Liu Shaoang, born to a Chinese father and a Hungarian mother.

After coaching Hungary to a gold medal and two bronze medals at Beijing 2022, Zhang strongly hinted at a comeback for the Chinese team, telling China News Service that she longed for a “fresh start in a new environment to create new values”.

With no sign of a contract extension for head coach Kim and his South Korean counterparts, Zhang’s role at camp cemented her status as a favorite to land the top job.

Another intriguing figure who came forward at the camp launch.

After winning 1,500m gold and 500m bronze as the host’s representative at the 2018 Pyeongchang Games, Lim was embroiled in a legal dispute with a former South Korean teammate over allegations of sexual harassment, which led to a one-year suspension imposed by the Korean Skating Union.

Citing fears the legal battle could affect his career, Lim accepted China’s offer to change nationality in hopes of making it to Beijing 2022. However, he missed the Games after narrowly failing to meet an ISU requirement of a three-year gap since the last run for his home country at an international event (March 2019).

Lim already has more than 1.6 million followers on Weibo, although he has never yet represented China in an official race, nor made any public appearances as an official athlete of the Chinese national team. .

An exceptional distance skater, the 26-year-old Daegu native is expected to significantly improve China’s competitiveness in the men’s 1,500m and relays.

How this Connecticut hockey player won an international medal for the Singapore junior team.