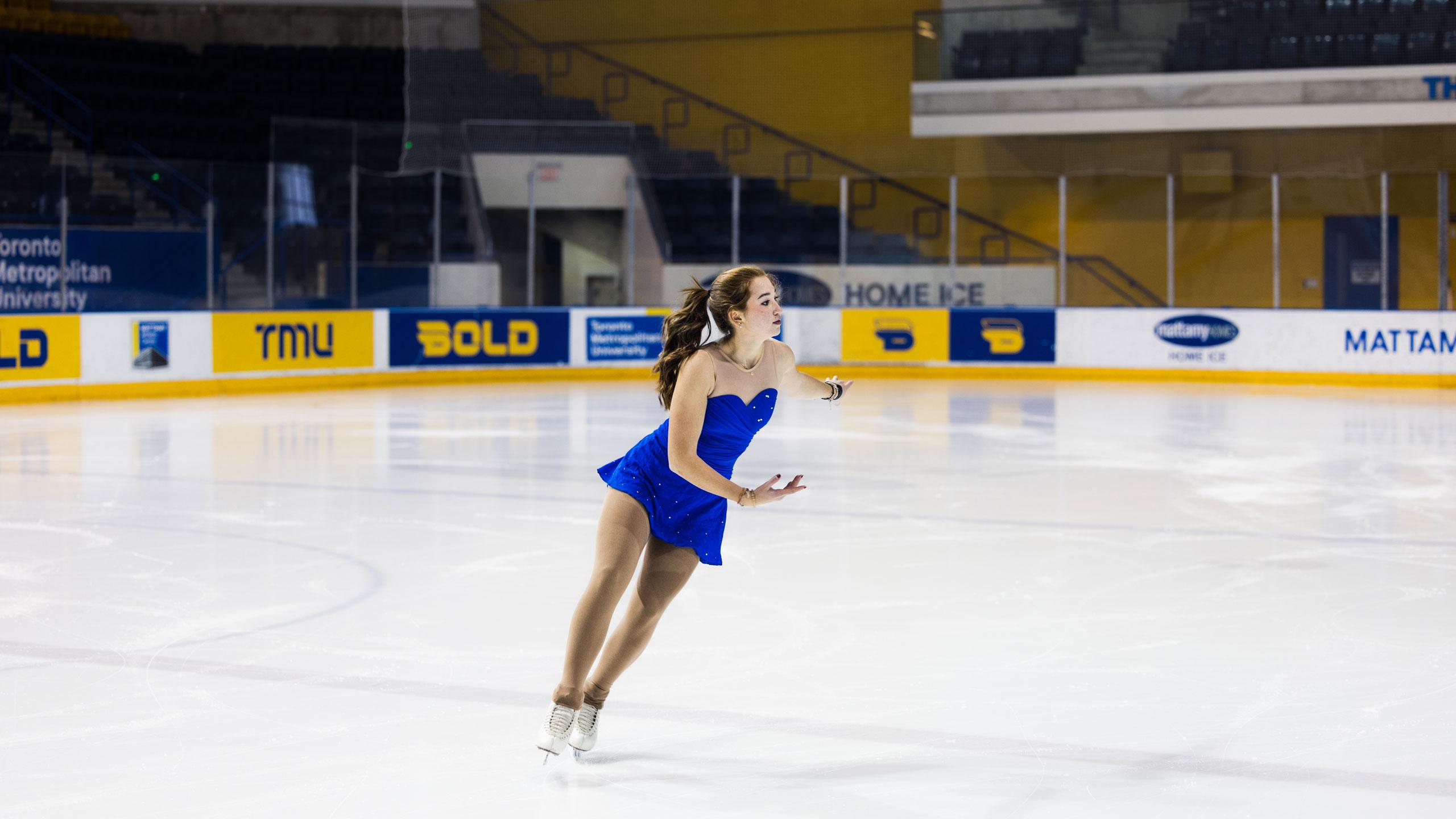 On a chilly Thursday in downtown Toronto, the Bold figure skating team from Toronto Metropolitan University (TMU) set up shop at the Mattamy Athletic Center (MAC) to practice their individual and group programs.

After loading their playlist into the arena’s sound system, the skaters practice alone or in pairs. From performing basic turns to executing axel jumps, a great deal of work goes into creating these programs – work that goes far beyond their time on the ice.

There’s a lot of time spent on the details that go into a performance, including the music they skate to, their outfits, and the staging of the choreography.

“We have a lot of rookies, so it’s been fun getting to know everyone”

Adele’s “Skyfall” can be heard through the MAC speakers as sophomore Graphic Communication Management student Marion Pollard begins a singles routine. But not all songs are lyrical; duet routines are practiced using instrumentals and songs of a more emotional nature.

“Being fully immersed and providing our interpretation of our selected music is essential in our sport,” Pollard said. “It takes into account our competition scores, so making sure we like the song selections is our first step.”

Many of the skaters wore blue dresses with iced out rhinestones on them, which will be used for their next meet. The reasoning behind this is to make sure they feel as comfortable as possible in their uniforms before hundreds of eyes are on them in the next few days.

“It was great to have creative people in the team”

The group is preparing to participate in the Fall Invitational on November 22, where they will travel to Brock University’s Meridian Credit Union Arena to compete against other Ontario universities. There has been no competition at the MAC since February 2020 and the figure skating team will also not have a home event this season.

However, Pollard is excited about what this season has to offer and the increase in events the team will be attending.

“Because of the pandemic, we haven’t had much in the last year,” Pollard said. “This year we have a lot more competitions away from home and we are excited to travel together as a group.”

But this season is different from the others. Last season, the team competed at the Ontario University Athletic Championships (OUA) in Aylmer, Ont., where some skaters competed in the final events of their careers. It was also the team’s only OUA competition last season.

With skaters, including former captain Julia Iaboni, not returning this year, the team environment has changed as younger athletes take on more leadership roles. Pollard is one of those people who leads in everything from cheering on her teammates to helping with off-ice production.

“We have a lot of rookies, so it’s been fun getting to know everyone,” Pollard said. “There is a big difference between varsity skating and traditional competitive skating and we have a lot to do as a group.”

In addition to preparing for two invitational meets and the OUA championships in February, the team is looking to raise awareness and build awareness in the local market.

The group is expected to take part in the Cavalcade of Lights at Nathan Phillips Square where team members will perform their programs for downtown visitors.

Tiffany Huang, an early childhood student, is thrilled with what attending this festival has to offer. As most events are usually held solo or in pairs, this is an exciting prospect for the group.

“Events like this are important for team building and they give us a unique scenario,” Huang said. “It’s an opportunity to perform as a whole band.”

Compared to other sports, creativity is strongly solicited in figure skating, from the planning stages to the execution of a program.

It is helpful for some skaters to participate in creative-focused programs, including the sports media program or creative industries.

Anna Carter, a second-year fashion student, is one such skater.

“It was great to have creative people on our team,” Carter said. Their creativity also spills over to other aspects of the team. “They help us with our social media platforms and the editing process for our music selections.”

When it comes to role models in figure skating, especially in the U Sports realm, Tessa Virtue and Scott Moir stand out for the majority of skaters. The duo are known for their dynamic performances at the Olympics from 2010 to 2018, winning five medals during that time.

“Due to the pandemic, we haven’t had much in the last year”

In a niche sport compared to its counterparts, figure skating offers a variety of aspects that set it apart.

Carter noted that sports like hockey, soccer, volleyball and basketball are team-oriented. But figure skating offers a mix of individual and pair events. Additionally, the entire figure skating program at TMU is team-based.

“At the college level, it’s both individual and team focused,” Carter said. “It allows for a different viewing experience for the audience.”

Although the team won’t be performing at the MAC in the near future, an exciting season is ahead for the Bold Figure Skating Team. With three invitations and performances in local events to come, the sport has officially made a strong comeback at the university.

“We want to perform better with the Bold name and achieve higher competition scores than ever before.”