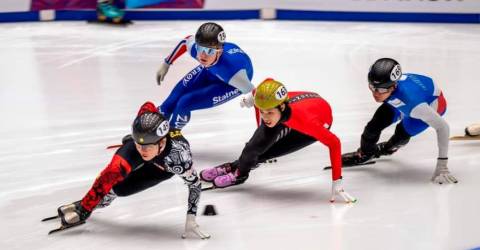 Smooth glide for the Olympic skater

PETALING JAYA: What started as a simple school activity to pass the time has become a lifelong passion for 18-year-old Sean Yeo.

Since then, he has competed in the 2020 Winter Youth Olympics in Lausanne, Switzerland. He qualified for Lausanne after winning the world ranking in short track speed skating at the 2019 World Junior Championships in Montreal at the age of 16.

Turning 19 in July, Yeo said the sun his passion began when he was seven years old.

“It was a school curriculum activity introduced to us in 2010 to bring the children together by ice skating once a week at Sunway Pyramid.

“When my feet first hit the rink, I knew I could skate for hours because I loved the joy it brought me. I was skating almost every day until the rink closed,” he said, adding that at the age of 12 he decided to devote his full attention to the sport and began his career in sports. personal improvement.

“I started with figure skating in my freshman year and when short track skating was introduced to Malaysia in 2011, I trained for both. They are two very different types of ice skating sports and eventually, between 2014 and 2015 I decided to focus on short track speed skating.

Yeo said short track speed skating is a form of competitive ice speed skating, where multiple participants skate on an oval ice track with a distance of 111m.

“I was captivated when I watched speed skating. The precision of form, technique and power, all perfectly balanced to achieve maximum speed, is exhilarating. It’s beautiful. It’s watching people dance with the laws of physics and I fell in love with it.

Over time, Yeo found he yearned to do more than he was used to, and his adventures to explore the world of ice sports began.

“I wanted to do more than what I was doing in Malaysia at the time, so I started looking for a country that could provide training for foreigners. That’s when I found myself in Korea for two and a half years and spent another six months in England from 2017 to 2020 to hone my skills,” he said.

Of his plans for the future, Yeo said, “I hope to spend as much time and energy perfecting my technique and shortening my time while pushing myself to see exactly what I’m capable of.”