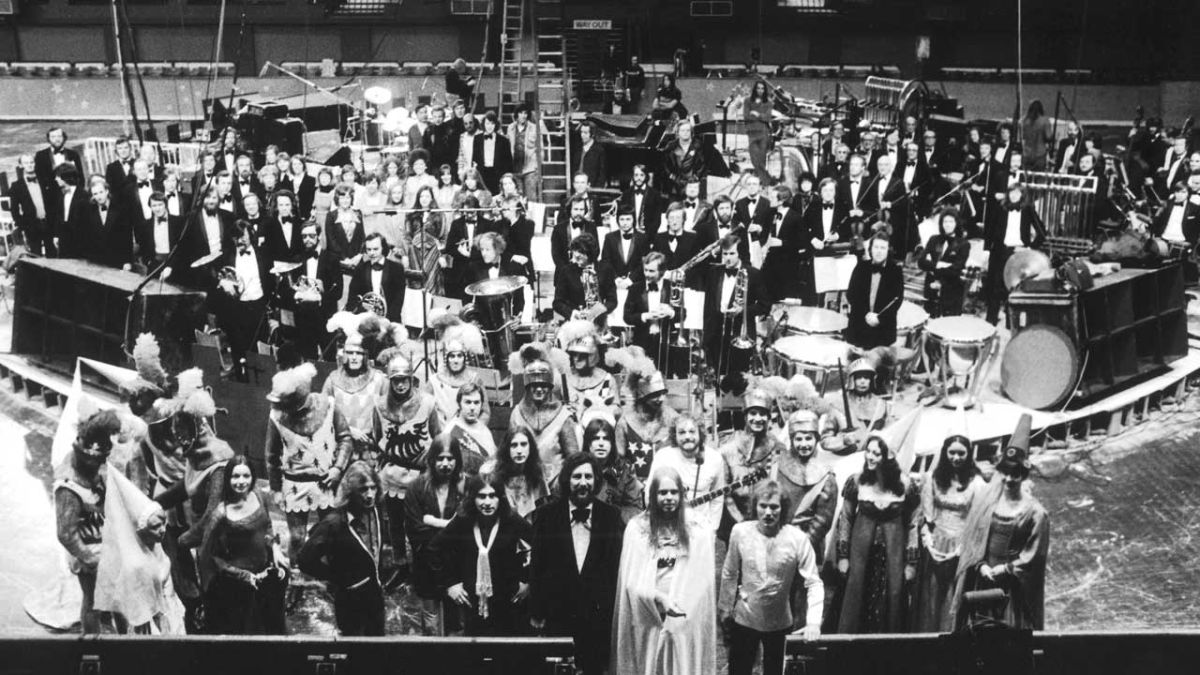 Mid-’70s progressive rock had a reputation for being pompous, grandiose, and excessive in every way. Many named acts of the time were culpable, but it is generally held to be true that with a particular show, a particular performer went one further and one after anyone else: The Myths and Legends of King Arthur and the Knights of the Round Tableas presented for three consecutive nights in July 1975 at Wembley Empire Pool (now Wembley Arena) by Rick Wakeman.

As well as the linen-haired magician of the ivories himself, resplendent in Merlin’s cape and pointed hat – there, on his podium, ‘between the stacks of keyboards in the custom-built castle – the spectacle, like the recently released album, featured its six -strong band the English Rock Ensemble (ERE), narrator Terry Taplin, conductor David Measham and the 46-person New World Symphony Orchestra (NWSO), conductor the Guy Protheroe Choir and the 46-person English Chamber Choir (ECC), and the eight-strong Nottingham Festival vocal group.

And to take the execution staff up to around 130, what the program notes describe as “a host of ice stars”.

King Arthur… was presented on ice. But you knew it. Because, as has been hinted before, Wembley ice shows are to Wakeman and prog what decapitated bats are to Ozzy and heavy metal. They are locked in the public consciousness, part of rock mythology.

We look back at all the rock milestones through a series of distorting lenses, but the two lenses responsible for doing the most distortion when it comes to King Arthur… at Wembley, it’s punk rock and spinal valve. The overwhelming consensus was: “Spectacular ice cream? What a load of bullshit.

All King Arthur… the episode on the ice was spectacular rock madness indeed. He put ‘X-rated’ in Excaliburand it sent Wakeman’s career into an almost terminal dive.

“We’ve always been extremely serious about the music, but not much else,” says ERE bassist Roger Newell. “The idea of ​​mixing skateboarding with rock was another ‘first’, but it was also hilarious…”

“The ice was needed for a show immediately after our appearance,” Newell confirms. “As the frozen area was like a barrier between the audience and the band’s platform, something had to happen there…”

If not exactly improvised, the style and choreography of the ice stars’ contribution was inevitably an afterthought. When Wakeman’s manager Brian Lane asked the group what they would like the skaters to wear for a particular number, “being red-blooded men”, they suggested peplums and stockings. And so it happened.

“Results!’ Newell laughed. “Audiences loved it. Especially when a girl lost her top. That’s when we realized how cold it was in there.”

According to Rick, a skater knight didn’t show up for a show. At first, no one noticed. All went well until the sequence where the knights were supposed to pair up and kill each other… whereupon an odd knight could be seen skating sadly around the bodies of his fallen comrades. Eventually, a moment of inspiration occurred and he fell on his own sword, to wry applause from the audience.

Guy Protheroe and Ann Manly – then, as now, mainstays of the English Chamber Choir – remember that the always generous Wakeman had set up a free bar for performers.

“At the time, some sections of orchestras were pretty heavy drinkers,” says Ann. “At the dress rehearsal, one of the horn players had obviously had a lot to drink at lunchtime. The very talented young blonde skater playing Guinevere appeared, skating around the castle. At that point, this particular musician leaned back to try to get a continuous view…and he, his chair, and his horn all disappeared. There was this wondrous sight of him sliding backwards across the ice at considerable speed, holding his horn up to protect it.

For all his warmth, generosity, and good humor, however, Rick was a perfectionist, a man so driven that he repeatedly put his health and wealth at risk to achieve what he wanted to achieve. Obliged to record his second “solo” album Journey to the Center of the Earth (released 1974) live because A&M UK had refused to fund a studio version, he had to seek verbal support from A&M USA and fund the project himself with his earnings from Yes and paying off his house.

Shortly after, at just 25, the pressure, combined with his enthusiastic drinking, caused Rick to have a heart attack. The Myths and Legends of King Arthur and the Knights of the Round Table was written as an oblique musical autobiography as he recovered in hospital.

“I was told that I couldn’t work anymore and that if I did, my heart would give out,” says Rick. “The Last Battle After being informed by the specialist, I wrote that I had stopped playing and retired in order to give myself a reasonable chance of recovery.

The album is therefore much more personal and sincere than its presentation suggests.

Rick went back to work – and drinking – with even more intensity. Although he spent at least as much touring on Journey… as he earned, he insisted that A&M fund a studio recording of king arthur…in the same flamboyant style. Another fight ensued. Rick tended not to dwell on the negative and to protect his collaborators from the economic situation and his state of health.

Although they were well attended and – for the most part – well received at the time, when the Wembley shows ended Rick found he was now seriously in debt. United Kingdom, King Arthur… reached an impressive No. 2, but in the US it didn’t top No. 21. Rick’s follow-up, No land connectionwas originally conceived as a double album, but was reduced to a single upon recording by record company edict.

“It hit Rick hard,” says Roger. “He became quite introverted and started to question his judgment on musical elements, which he never had before.”

Reviews for the finished album were harsh, and – although it reached No. 9 in the UK and sold over 4 million copies worldwide – it stalled at No. 67 in the US. As Roger points out, therefore, it was not really the emergence of punk, but the withdrawal of support from record labels – indeed a self-fulfilling prophecy – that caused the break-up of the original ERE, the return from Rick to Yes and the end of the highly publicized stage of his solo career.

Even afterwards, punk’s role in changing attitudes towards the type of music he was famous for was just one of the factors that kept him in the doldrums for so long.

For a few years, another factor was Rick’s drinking. After becoming gravely ill again in 1985, he gave it up and instead turned to God. He also had a series of bad luck in his personal relationships. Between 1980 and 1984, there were three different Mrs. Wakeman.

He may have learned his lesson when it comes to the bottle and – eventually – the altar, but even when times were tough, he was never really able to resist the lure of big production. At the rustle of a checkbook opening, he would dive back in, often with painful results.

In the 1980s, the Tim Rice collaboration 1984 was supposed to be a musical, until the backers pulled out. And the years 1988 Time Machine was designed as a tour…. wait for it…spectacular ice cream. It was tempting fate. And fate showed no restraint. Even before Polydor rejected the album (it was released a year later on a small independent), the lollipop had once again fallen off the live show’s sponsorship stick.

In the 90s and 2000s, Rick serially revisited and reworked earlier projects. In 1998, he had the chance to turn back the clock and go big when EMI Classics funded a remake of Journey… as Back to the center of the earth, involving a new ERE, the LSO and the ECC. Predictably, Rick worked so hard on it that he contracted pleurisy and double pneumonia, gave him 48 hours to live, and took six months to recover.

The album was released in 1999, but due to Rick’s inability the planned major live presentation did not take place at that time. Come back… reached number 34 in the UK, but made little impression elsewhere, particularly in Canada, where it was not even released. Naturally, then, its live premiere was in Quebec, Canada, in 2001.

Five years later – with a multi-car accident at speed on the M40 and a double hernia operation helping to liven up Rick’s break – Quebec also hosted the next performance – to an appreciative audience of around 50,000 to 100,000 people. . It was worth the wait. Rick described it as “the biggest high I’ve ever had” and “the performance night of my musical life”.

Even in 2002, he seemed more optimistic about his “live shows”. “Yes, I invested a large part of what I earned in it, and why not? I like to do it right, and if people have bought an album with an orchestra on it, then whenever possible I try to give them that orchestra live.

In 2005, when asked if he would like to see something else again, Rick replied, “Yeah, King Arthur… Just by adding new music to the original and playing it live.”

Seven years later, it happened. Wakeman re-recorded the album, including the extra passage which – due to the limited space offered on vinyl records – had never made the original release. And in 2016 he played King Arthur… live at the Stone Free Festival at the O2 Arena in London. There was an orchestra and a choir, and actor Ian Lavender narrated from above. But the ice cream? Nowhere to see.

“Don’t laugh, we’re watching Nottingham,” Wakeman said. “I once had a date with Robin Cousins ​​about choreography. Trust me, nothing is normal.”

The original version of this feature appeared in Classic Rock 102, February 2007. Rick Wakeman’s Grumpy Christmas Tour will skate across the UK in November and December.