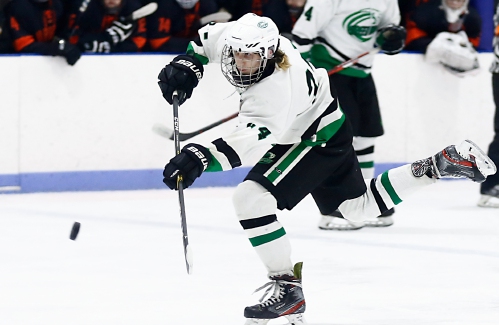 After a stellar season, MJ Paulin of Greenfield was honored for his efforts — both on and off the ice — last week.

The annual Bessone Awards — which honor high school hockey players in Western Massachusetts — were announced Thursday by the Amo Bessone Awards Committee, and Paulin was one of 11 athletes shortlisted for an award.

The Green Wave defender received the Harold Passerini Award for outstanding athletic, academic and community achievement. The award is accompanied by a $500 scholarship.

“I was shocked when I found out I had won it,” Paulin said. “I’m very proud to have won this. In my 18 years on this planet, I put my all into everything I do, from ice cream to the classroom, to the community, so it was nice to be rewarded with that.

On the ice, Paulin was a force at the back, helping lead the green wave to a Western Mass Class B title. He finished the season with three goals and 11 assists.

He learned from his coach, Adam Bouchard, that he had won the honor and was also the first Greenfield player to win the Harold Passerini award.

“It’s a surreal feeling,” Paulin said. “I was really amazed to win that. I’m so grateful. It was pretty perfect with the way it all went. We won back-to-back Western Mass tournaments, we made the tournament of State, which is a huge achievement and now it really is the icing on the cake.

It’s no surprise to Bouchard that Paulin won this award.

“MJ worked hard his entire high school career,” Bouchard said. “Not just on the ice, but even more importantly in the classroom and in the hockey community. It embodies what Green Wave hockey is all about – doing things the Green Wave way, good things will happen. The program is very proud of this achievement by MJ. It represents the entire program and shows that hard work and sacrifice count.

Off the ice, Paulin is an almost straight student and member of the National Honor Society. Through the NHS, he has helped with Relay for Life, volunteered at nursing homes, helped with Big Brother, Big Sisters, and this year he traveled to Greenfield Middle School to help fifth grade teachers year working with students and explaining how important school is.

Outside the NHS, Paulin works with the Learn to Skate program in Greenfield, helping teach young children how to skate while serving as a role model.

“I always did my best at school and tried to help the community,” said Paulin. “It’s nice to see that these efforts have translated into this award.”

Paulin isn’t set on his plans for next year, but AIC is currently his first choice. He has been in contact with the coach of the hockey club there and hopes he can continue to skate in the future.

“I’m going to stay consistent through the summer and keep skating,” he said. “I hope I can go there and be part of the team.”

Olympic skaters return home to inspire the next generation