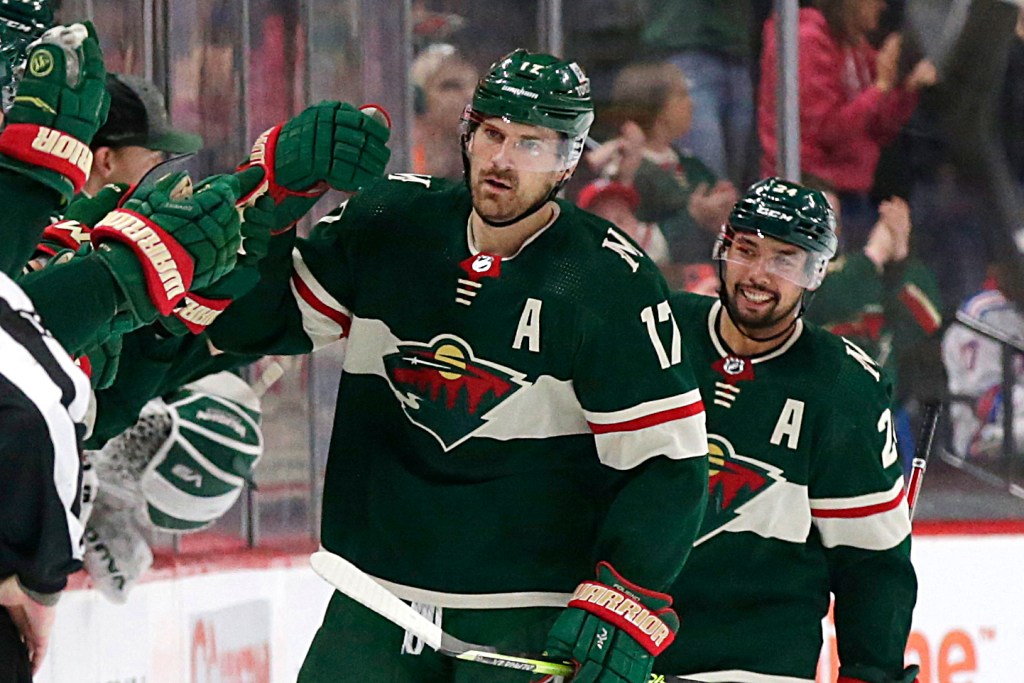 Wild the Wild has Marcus Foligno for Game 1 against the Blues? It sure looks like it.

Savage winger Marcus Foligno fell to the ice after taking a nasty knee-to-knee blow in the regular season finale against the Colorado Avalanche. He remained for more than a minute writhing in pain. He staggered to his skates and needed help in the tunnel.

At that time, it looked like Foligno’s playoffs might be over before it even started. Still, there he was Sunday morning at the Xcel Energy Center, skating with his teammates on the eve of Game 1 against the St. Louis Blues.

How the hell did Foligno recover so quickly?

“It’s the playoffs,” Foligno said. “It would be wrong to sit still.”

There’s no doubt that Foligno is playing through the pain. He’s not 100%. Very few players are at this stage.

“Just something I have to play for a while and I can do it,” Foligno said. “I wouldn’t be there if I didn’t feel capable of playing.”

Asked about the streak that led to the injury, Foligno admitted he feared the worst after colliding with Avalanche defenseman Kurtis MacDermid. He didn’t have much feeling in his leg after it happened. He tried to get up and immediately fell back.

“It’s not like he’s a small player either,” Foligno said. “Just kind of a tingling sensation in my leg. I’m glad to have some rest and feel good before the playoffs.

Although he started to feel a little better about 20 minutes after the incident, Foligno didn’t start to feel any real relief until he got his MRI results the next day.

Meanwhile, his linemate Jordan Greenway was thrilled to have Foligno back in the mix. It’s no secret that Greenway and Foligno-centered Joel Eriksson Ek has arguably been the Wild’s most dominant line this season.

“Obviously it was concerning,” Greenway said of Foligno’s injury. “He has a huge impact on our line and we rely on him to do what he does best. It was great to see him on the ice today and we’re lucky he’s as excited to play tomorrow as he is. It’s a good position. »

When asked what he needed to hear from Foligno to feel comfortable playing him in the opener, Evason replied: “We need him to say, ‘I am ready to go “.”

Is he ready to go?

“I think I’ll be fine in the sense of playing physical hockey,” Foligno said. “I wouldn’t put myself or the team in that position if I couldn’t do that stuff. I feel confident enough to play this way and have this impact for our team.

After being extremely open about roster decisions throughout the regular season, Evason opted for some sense of the game heading into Game 1.

The biggest talking point over the past week has been whether it will be Marc-Andre Fleury or Cam Talbot between the posts. Although the decision was likely made at this point, Evason decided not to announce his starter for Game 1.

“Sometimes we don’t want the other team to know what’s going on either, do we?” Evason said. “Any small advantage that we think we can gain, we will try to do it. I’m not doing this to upset anyone. It’s a matter of keeping (the decision) close enough (to the vest).

It looks like Alex Goligoski and Jordie Benn will be healthy scratches in Game 1.

Both players made an impact throughout the regular season. The fact that neither will play for the Wild in Game 1 of the series against the Blues is emblematic of the depth of the blue line.

“There are a lot of tough decisions,” Evason said. “We think our depth is an advantage for us.”

‘You’re skating on thin ice’: magistrate’s warning as he grants bail | The mail